NEW ORLEANS (AP) — Wil Lutz made a 58-yard field goal as time expired to lift the New Orleans Saints to a 30-28 victory over the Houston Texans on Monday night in a game that had three scoring plays in the final minute.

Deshaun Watson threw a 37-yard touchdown pass to former Saints receiver Kenny Stills with 37 seconds left, capping a two-play, 75-yard drive that put the Texans in front after they began their final possession down by six with 50 seconds left.

But there was just enough time remaining for Saints quarterback Drew Brees, who capped a 370-yard a two-touchdown performance by completing a 15-yard pass to Ted Ginn Jr., an 11-yarder to Michael Thomas and another pass to Ginn for 9 yards in quick succession. That allowed New Orleans to save its final timeout until just 2 seconds remained and set up Lutz's career-long kick.

The 40-year-old Brees completed 32 of 43 passes. He threw one interception deep in Houston territory in the first half that could have proved costly but did enough to make up for it.

Brees appeared to have all but sealed it when he spotted Ginn deep downfield on third and 2 and connected for a 41-yard gain to the Houston 44 at the 2-minute warning. Alvin Kamara, who had 169 yards from scrimmage, followed with an 11-yard run, and the Saints ran the clock down to 55 seconds before Lutz converted a 47-yarder.

Watson completed 20 of 30 passes for 268 yards and three touchdowns — two of them to DeAndre Hopkins — and also ran for a 21-yard score on a fourth-down play.

There appeared to be disagreement over officials' handling of a 10-second runoff after a replay review in the final minute of the first half when the Saints were trying to score with their hurry-up offense.

The review booth stopped the game with 26 seconds left to look at whether Thomas' catch was long enough for a first down after he was initially marked just short and in bounds. After the review resulted in a first down, officials cited NFL rules requiring a runoff. The runoff began from when the game was stopped, not when Thomas came down with the ball 15 seconds earlier.

Brees could be seen animatedly disputing the decision, but referee John Hussey announced that the runoff was correct. The Saints had only 16 seconds left when they snapped the ball on their own 47. They got close enough to try a 56-yard field goal as the half expired, but Lutz's kick was just wide.

Fans in the Superdome, who won't soon forget officiating gaffes in last season's NFC championship game that also went against the Saints, booed as time expired.

The Saints' Marcus Williams, who had a momentum-swinging interception earlier in the second half, stayed down on a knee after Duke Johnson's 32-yard run in the fourth quarter. He left the field on his own after a trainer briefly spoke with him. 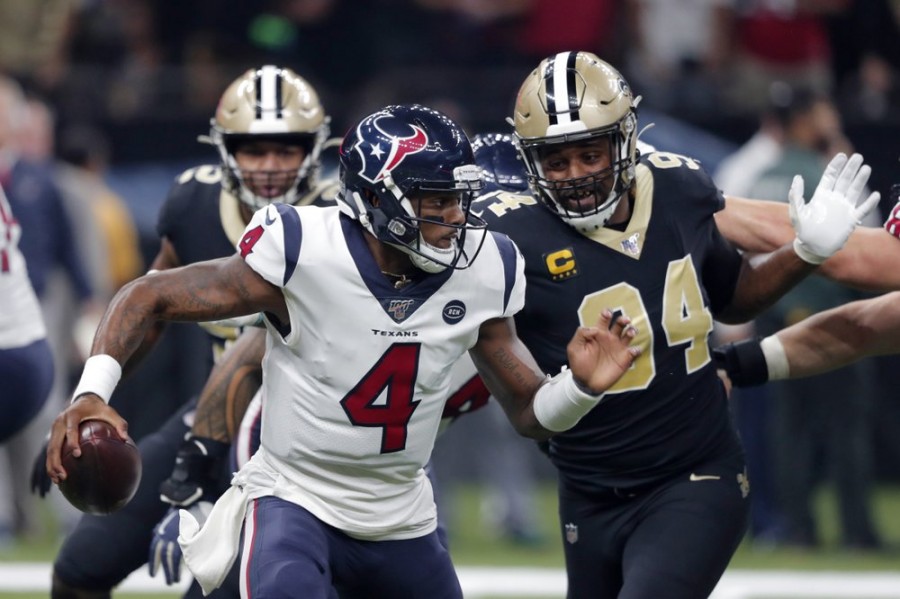