PHILADELPHIA (AP) — Mike Foltynewicz is almost back to his All-Star form of a year ago.

Atlanta won its 90th game, increased its lead over Washington to 9 ½ games and reduced its magic number to 10 with 17 games remaining.

"It's a very good number, that's for sure," Braves manager Brian Snitker said about matching last season's win total. "We've got a lot of baseball to play, so hopefully we get a lot more."

The Phillies entered two games behind the Cubs for the second wild-card spot in the NL.

"We have to be better, especially now," slugger Bryce Harper said.

Foltynewicz (6-5) retired the first 13 batters before Corey Dickerson went deep in the fifth. He gave up three hits, one run and struck out seven. The right-hander won his fifth straight decision. The Braves have won his last 10 starts, including seven in a row since he returned from Triple-A.

"We just mixed pitches well tonight, up and down," Foltynewicz said. "We used all the offspeed well early, kind of like we talked about the last time. We had some success with getting early one-pitch outs to help get deeper into the game."

Foltynewicz was 13-10 with a 2.85 ERA last year but struggled the first half of this season and had a 6.37 ERA when he was sent to the minors in June. He's lowered his ERA to 5.00 since coming back.

"He looked confident. Just the whole package was really good," Snitker said. "He's getting there. Hasn't been consistent enough yet. I'd like to see him do that right there, three or four times in a row. That would be good."

"I didn't have command of any of my pitches," Nola said.

Acuna hit Nola's second pitch of the game out to left-center for his 38th homer and 15th career leading off, including seventh this season. Ozzie Albies and Freddie Freeman had RBI singles in the second to make it 4-0.

"To score two runs off Nola in the first inning is always a big deal and we did it again in the second inning," Freeman said. "That settles everyone down."

Donaldson ripped an opposite-field, three-run shot off Nick Pivetta in the seventh to give the Braves a 7-1 lead. Donaldson has 37 homers, four shy of tying his career-high. He hit 41 when he was AL MVP in 2014 with Toronto.

Cesar Hernandez hit a solo homer off Josh Tomlin in the ninth to cap the scoring.

Hernandez became the ninth different Phillies player with at least 10 homers this season. The only other time the team accomplished that feat was 2004.

Dickerson has 18 extra-base hits (10 doubles, two triples, six homers) and 31 RBIs in 32 games for the Phillies since being acquired from Pittsburgh on July 31.

The Braves have won three of four in Philadelphia since getting swept in a three-game series to start the season.

BRAVES: OF Nick Markakis (fractured wrist) is expected to take live batting practice with the team on Wednesday. He could return as early as Friday depending on how he feels after swinging. .... OF Ender Inciarte (hamstring strain) stayed in Atlanta. He's jogging but there's no timetable for his return.

PHILLIES: Harper was back in the lineup after two games. He was hit on the right hand Friday and pinch-hit Sunday. 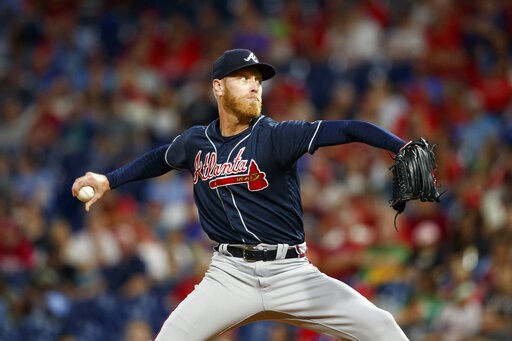 Atlanta Braves' Mike Foltynewicz pitches during the second inning of a baseball game against the Philadelphia Phillies, Monday, Sept. 9, 2019, in Philadelphia.