ELKHART LAKE, Wisc. – In a two-lap shootout in Saturday afternoon’s CTECH Manufacturing 180 at Road America, Christopher Bell checked out from the competition to claim his sixth NASCAR Xfinity Series win of the season.

Bell found himself battling the best of the best when it comes to road course racing in NASCAR inside the final laps of the race between A.J. Allmendinger and Austin Cindric, but when Gray Gaulding went into the gravel in turn 1, the full-course caution waved setting up an eight-mile dash to the finish.

“Man, I’m honestly in shock,” Bell said. “I really butchered qualifying and tore the crap out of the left-front. I felt like once we got in the race there, we’d be able to drive by those guys. Instead, they dropped the green flag and they were driving by me. That wasn’t much fun.

“Then I told Jason (Ratcliff, crew chief) I was really, really tight. We got those tires off and he said the left-front was hurt pretty bad. We got pretty good there when we put our new set of tires on.

“That strategy worked out well for us coming in there (with 14 to go) and then the yellow coming out. This car was really, really fast today. We’ve had a great road course season.”

On the final restart, Bell cleared second-place Allmendinger, but it was Cindric who pitted during the last caution that was putting on a show trying to charge from his 20th place restarting position.

By the white flag, Cindric had passed 15 cars and found himself in the clutches of second-place Matt DiBenedetto but when DiBenedetto spun his No. 18 Toyota Supra in turn 14, Cindric crossed the start-finish line second, 1.891 seconds behind Bell.

“We talked about a five-to-go plan, that was like a green-white-checkered,” offered Cindric who came up one position short of claiming three straight road course wins during the month of August. “I wasn’t 100 percent confident, but at the same time, we were battling a lot of wheel hop after four or five laps on tires and we had a lot more than on tires.

“In this kind of racing, you pretty much know that you’re going to get used up if your slower, so we wanted to go on offense and that was our strategy all day and we probably just needed one or two laps to get our Menards – Richmond Ford Mustang in Victory Lane. All in all, a good day, good points, P2, is alright.”

Cindric described his 19-car charge through the field in two laps in one fitting word.

“Chaos,” Cindric added with a smile. “I passed a lot of cars that just ended up overdriving corners and missing corners. It was chaos, it was insane. I think it’s why all these people show up at Road America and enjoy this type of racing.

“You never know what you’re going to get, it always comes down to those last lap dashes to the finish, I’m glad to be able to put on a show at a place like this.”

For Bell, it was his 14th career NASCAR Xfinity Series victory, but first on a road course. He attributed part of his success to luck, while also taking the time to reflect on the last-lap mishap for his Joe Gibbs Racing teammate DiBenedetto.

“I guess I just get lucky on these things, that’s for sure,” added Bell. “I’m really heartbroken for Matt DiBenedetto, too. He was obviously really, really fast. We knew in practice that both of our cars were really good, and we were going to be right there racing with each other.

“I don’t really know what happened, but I saw him go flying off (turn) 14 so that sucks. He’s in a tough spot right now and he needed a good run there.”

Allmendinger admitted that he spun the tires during the last restart and later collided with Noah Gragson while battling in the top-five. He became involved in another off-course exchange on the same lap and limped to a 26th place finish after making a pit stop on the final lap.

For Allgaier, the top-10 was a relief after nosediving into the gravel in turn 1 after suffering a flat left-front tire on the last lap of Stage 1. Falling off the lead lap, getting the lap back, the JR Motorsports driver used the remainder of the race to earn his 15th top-10 of the year.

Playoff contender Custer also had an impressive rebound after falling down a lap after running off course during the first lap of Stage 2 and mowing down several track signs. Earning the free pass late in the race, Custer used aggressive driving in the final run to the finish to earn his 15th top-10 of the season.

With three races remaining in the regular NASCAR Xfinity Series season, next up is a throwback weekend at Darlington Raceway for the running of the Sport Clips Haircuts VFW 200 on Saturday, August 31, 2019. 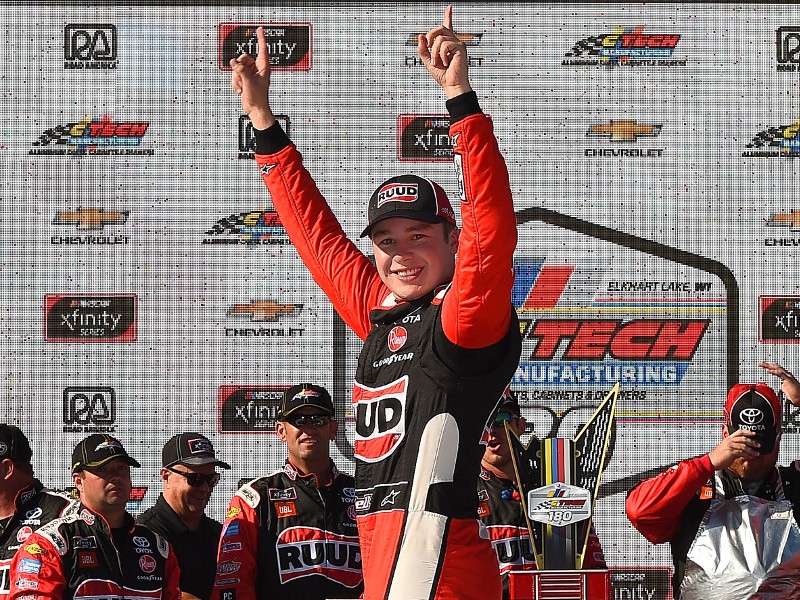