The day photographer Al Clayton died, he left behind a legacy. Clayton captured moments of A-list celebrities and musicians, but the work he was most proud of was the images compiled into the 1969 book called “Still Hungry in America,” Clayton’s daughter, Jennie Clayton, said.

“He said ‘I hope I made a difference.’ And I’m like, ‘I mean, you doubt it? You wonder if you made a difference?’ And it was the first time it even crossed my mind that he wasn’t sure that what he tried to show was seen,” Jennie said.

The images came from Clayton’s time spent travelling the deep south in the 1960s. His images were originally used as documentary footage by the U.S. senate subcommittee in 1967 to showcase employment, manpower, hunger and poverty in America.

“When those little children are looking into my dad’s camera, I feel it,” Jennie said. “I think it’s a combination of all of it—their sadness, they’ve given up, and they’re little, you know? These are young children,” Jennie said.

Still Hungry in America was re-published by the University of Georgia Press in 2018, with a new foreword written by historian Dr. Tom Ward, Jr., who also analyzes food insecurity and the American diet in today’s society. The original foreword was written by Senator Edward “Ted” Kennedy.

“What I was doing was say ‘Okay, where does this book fit and why do we care about this book and these photos 50 years later,’” Ward said.

The purpose of the updated foreword was to merge Clayton’s photos with the 21 st century in a way that not only taught people about hunger and poverty in the 1960s, but also how those same photos are relevant today, Ward said.

Once the book was republished, Jennie felt it was time to put her father’s work back on display for the public, she said, which is where Executive Director Kay Blackstock with Georgia Mountain Food Bank fell into the mix.

Blackstock received a call from the director at the Quinlan Arts Center and was told about Al Clayton's exhibit coming in the fall.

The food bank collaborated with the Quinlan and The John Jarrard Foundation to raise awareness for their Faces of Hunger campaign and Hunger Action Month, which kicked-off with the openning of Still Hungry in America and guest speaker Tom Ward on Aug. 15.

Clayton’s photos are powerful and will change how you view hunger in America forever, William Hedgepeth, an old friend and ex-travel partner of Clayton’s, said.

“Once your consciousness is open to the fact there exists starvation in this country, you never go back to thinking that there isn’t. You know? Al’s work evoked that notion that consciousness is irreversible. Once you’ve seen and experienced his photographs and what they say and the conditions that they illustrate, you never go back to your old way of thinking,” Hedgepeth said.

Jennie has followed closely behind her father’s footsteps by putting herself behind the camera.

“If he saw me taking pictures today, oh my gosh, I’d have my biggest fan,” Jennie said.

Jennie added a few of her still photos to her father’s exhibit to highlight what hunger looks like in Union, Lumpkin, Dawson, Forsyth and Hall counties. She took photos of five people who rely greatly on Georgia Mountain Food Bank, their stories can be heard and read at the exhibit until Oct 5.

The immediate difference between Jennie’s photos and her father’s is that faces of hunger today are not as evident as the photos taken in the 1960s, but that doesn’t mean hunger and a need for help doesn’t exist. Many of the people searching for help are hardworking households, Blackstock said.

“There may be two or three people working in the home and still their wages are not keeping up with the cost of living, and they are one crisis away from not having enough food to feed themselves or their families,” Blackstock said. “and you would never know by looking at them.”

Today, faces of hunger can pass as average-looking people who may not particularly look the part -- tired, hungry, maybe homeless; And often times, people who have struggled to put food on the table come from a position that feels shame or embarrassment upon asking for help, Blackstock said.

“If ever there was a time we needed to love one another, have compassion for one another, not be judgmental and just do what we can to help somebody, this is the time,” Blackstock said.

A list of events for Hunger Action Month can be found in a previous article. Visit Georgia Mountain Food Bank online for more details and information. 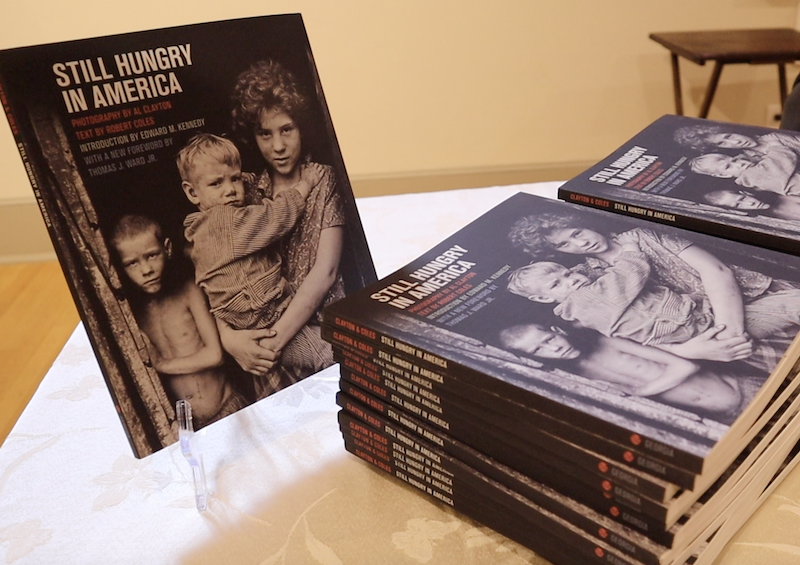