Mason Tucker knew his best shot at getting to victory lane in Saturday night’s Limited Late Model feature at Hartwell Speedway was to beat defending race winner Grant Jordan into turn one on the opening lap.

That’s exactly what he was able to go, as Tucker led wire-to-wire in a caution free feature en route to the win at the Hartwell, Georgia raceway.

Jordan, who was looking for his third straight feature win, scored the pole by turning the fastest lap in qualifying around the 3/8-mile clay speedway. Tucker was second quick, putting him on the outside of the front row for the start.

On the drop of the green, Tucker hung tough on the outside, using the fast high line to stay side-by-side with Jordon through turn one. As the two exited turn two, Tucker was able to clear Jordon on the high side, moving to the point as the field thundered down the backstretch.

Over the course of the 25-lap feature, Jordan hounded Tucker, looking for a way around the fast No. 23 time and again. But each time, Tucker was able to hold off the challenge. In the end, Tucker flashed under the checkered flag first for the win.

Jordan had to settle for second, with Wesley Jordan in third and Ted Crunkleton in fourth.

In other action, Parker Herring scored the victory in the Crate Late Model feature. Danny Sanders finished in second, with Austin Reed rounding out the podium.

Jimmy Ivester took the win in the Hobby feature, with Clay Thompson in second, Colby Thompson in third, Ervin Atkinson in fourth and Ryan Boles in fifth.

Evan Brown was able to get around defending race winner Paul Moore, and then held off a hard charging Rocky Jones for the Stock V8 feature. Moore finished third, with Jake Jordan in fourth.

Elliott Brayboy started the Stock Four feature with a failing clutch. Despite that, he powered his way to the lead, and then held off David Walker and Bryce Alewine to take the win. Pete Whitley finished fourth, with Jacob Rhome in fifth.

Tanner Nation was the winner in the Young Guns feature, with Dustin Young in second, Hoyt Partain in third, Logan Gunter in fourth and Alyssa Goldsmith in fifth.

J.J. Sorrow held off Randy Shaw for the win in the Front Wheel Drive feature. Joel Powell, Sr. followed in third, with Billy Burton in fourth and Alex Powell in fifth. 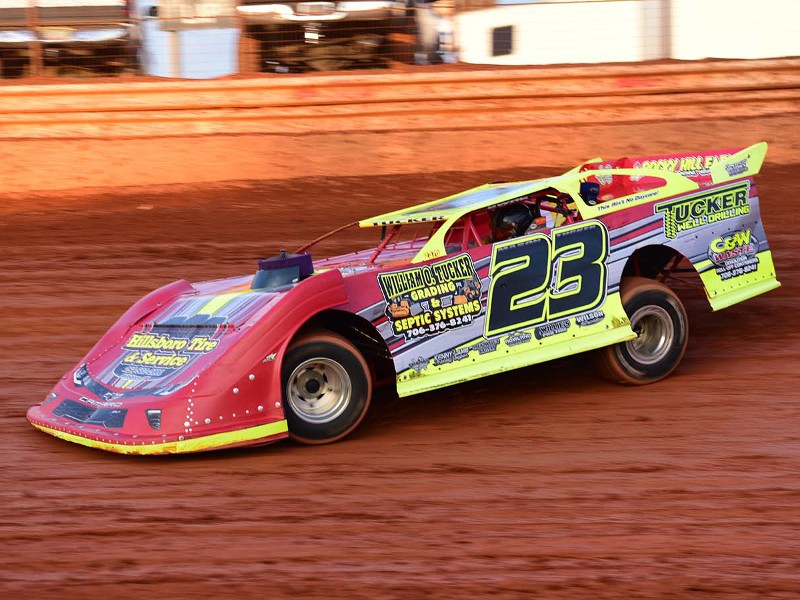