Jimmie Johnson never really had a chance to show what he could do at Michigan International Speedway, and the early trouble he experienced in Sunday’s Consumers Energy 400 kept the seven-time Monster Energy NASCAR Cup Series champion squarely on the Playoff bubble.

On lap 15 of 200, Johnson ventured up the race track, trying to challenge Denny Hamlin for position. The result was disastrous, as Johnson’s No. 48 Chevrolet drifted toward the outside wall and collided with the barrier.

The impact flattened the right side of the car, and Johnson lost three laps on pit road before his crew could put the Chevrolet back in running condition. Ultimately, Johnson finished 34th, eight laps down and fell to 18th in the series standings, 12 points outside the current Playoff cut line.

“The right-side tires went into the PJ1 (traction compound), and as soon as I got my tires in it, I went straight into the wall,” Johnson said. “When you’re aggressive, it doesn’t work and then sometimes you’re cautious and it doesn’t work. It was a great car. That hurt, for sure. We’re just going to have to rally on, and these guys are doing an amazing job. We’ll keep digging.”

Daniel Suarez ran fifth on Sunday and vaulted into 17th in the standings, eight points ahead of Johnson, who has qualified for every Cup postseason since NASCAR introduced its first Playoff format in 2004.

“It’s super disappointing,” Johnson said. “It’s a little easier when it’s not on you, and you can call it a mechanical or a flat or get caught up in a wreck. But I’m behind the wheel, and I’m the one that got us in the fence.”

If there was a saving grace for Johnson, it was a late crash that relegated fellow bubble driver Clint Bowyer to 37th at the finish, depriving Bowyer of a golden opportunity to gain ground in the standings.

“The guys around that cutoff point all seem to be having bad luck,” Johnson observed.

When the Monster Energy NASCAR Cup Series cars lined up for a restart on lap 137, Clint Bowyer was in an enviable position.

His No. 14 Stewart-Haas Racing Ford was running 18th, with fresh tires, and one of his chief rivals for a berth in the series Playoffs, Jimmie Johnson, was eight laps down after early contact with the outside wall.

Less that a lap later, Bowyer’s race fell apart. After contact with Paul Menard’s Ford, Bowyer’s car shot into the outside wall, damaging the Mustang beyond repair. After a failed attempt to get the car up to speed, the clock ran out on the team’s attempts to fix the No. 14 Ford.

Bowyer’s 37th-place finish left him tied with Ryan Newman for the final Playoff-eligible position — on a day when merely staying out of trouble could have earned him a significant advantage.

“Somebody got in the back of me,” Bowyer said. “When I went around, I just saw (Alex) Bowman, and thought it was him. I guess maybe the 21 (Menard) or somebody. As soon as it happened, I was just along for the ride. I don’t know. We have to get something figured out with these race tracks.

“We are really fast by ourselves, practice and qualifying really well, in the top five almost every single time but then we start the race and don’t make the grip we need to compete. We definitely need to find some things out. You can talk about the bubble and worrying about points, but I am way more worried about getting established and running up front at these types of race tracks.

Driving a car that had to be repaired after a brush with the outside wall in practice, Daniel Suarez avoided trouble and the sort of fuel shortage that plagued other competitors to run fifth in Sunday’s Consumers Energy 400 at Michigan International Speedway.

The top five moved the driver of the No. 41 Stewart-Haas Racing Ford to 17th in the Monster Energy NASCAR Cup Series standings, only four points behind teammate Clint Bowyer and fellow Ford driver Ryan Newman, who are currently tied for the final Playoff position.

“It was a decent day for us,” Suarez said. “We had ups and downs. There was something wrong, a bad set of tires or something in that second stage. We couldn’t control it.

“The team was able to overcome that with good adjustments and they put me back in the game with track position, and we were able to get a good result from there.”

As Suarez was interviewed on pit road, he watched teammate and race winner Kevin Harvick light up his tires in a celebratory burnout. 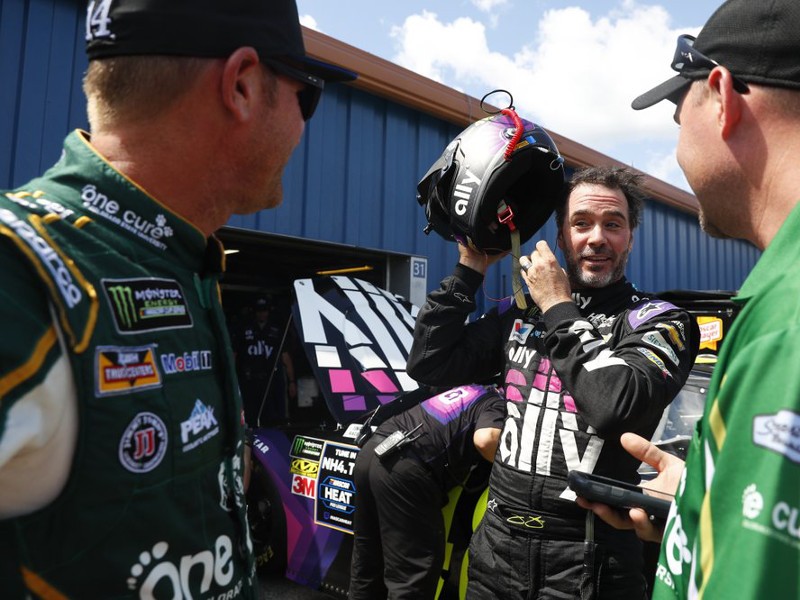