Joey Logano applauds use of traction compound at Michigan

Given that Joey Logano is a three-time winner at Michigan International Speedway — not to mention the winner of the June 2019 race at the 2.0-mile track — you might think the reigning Monster Energy NASCAR Cup Series champion would be in favor of keeping things status quo.

But that’s not the case when it comes to the application of PJ1 Traction compound. This weekend at Michigan, for the first time on an International Speedway Corporation track, PJ1 likely will play a role in widening the workable racing surface.

And Logano is all for it.

“I’ve been all good with the PJ1 pretty much anywhere we’ve gone so far,” Logano said on Friday at MIS, site of Sunday’s Consumers Energy 400. “I think it has (done) nothing but help and improve the racing and widen the race track out. Obviously, it’s the first time for it here, and we were all in qualifying trim the first practice (Friday) and we didn’t touch it.”

No, the Cup drivers didn’t go near the PJ1 in opening practice, because the traction compound was applied in the outside lanes. While it wasn’t a factor in Friday’s qualifying session, when the bottom lane was the quick way around the circuit, it will doubtless play a role on Sunday when 38 cars are looking for racing room.

“The PJ1 is something that we are all still learning about, and we are learning about how it works at each (track),” Logano said. “It works different at Charlotte than it does at Michigan or Bristol or Kentucky—the way it gets activated and wears out and how much grip it actually puts back into the race track.

No More Knoxville Nationals For Kyle Larson This Year

Kyle Larson knew the score when he entered the Knoxville Nationals this year. A lackluster preliminary would end his chances for the one of the dirt titles he covets most.

Besides, his day job with Chip Ganassi Racing is far too important. Larson is 14th in the Monster Energy NASCAR Cup Series standings with four races left in the regular season, and he’s not locked into the Playoffs.

So when Larson failed to advance to the feature at Iowa’s Knoxville Raceway on Wednesday, he knew the logistics for a Friday return just wouldn’t work, given the 5:05 p.m. qualifying start time at Michigan.

“I’ve always said that, if I didn’t have a good prelim night, I wouldn’t be able to go back,” Larson said on Friday afternoon at MIS. “It’s a bummer, but like I said, I already knew it going into it. I just needed to do better on Wednesday.”

Nor will Larson try to race his way through multiple races on Saturday. Instead, he will return to Knoxville to cheer on the winged 410 sprint car he fields for driver Carson Macedo.

“No, we wouldn’t race on Saturday because, with me not racing tonight, I’d have to start like last in the E-main, and it’s pretty much impossible to transfer. I couldn’t pass anybody the other night, so why would I be able to pass people tomorrow?”

For those who might question if Larson’s racing in other series might hurt his Cup effort, he has a definitive answer.

“To me, the way I view it, the more often I’m racing, the better I’m becoming,” said Larson, who qualified 17th for Sunday’s Consumers Energy 400.

“I would race every single day of the week if I could, and I believe it would help me.”

For Ben Rhodes, There’s Only One Path To Truck Series Playoffs

That’s not a line lifted from the movie “Deer Hunter,” not in this case.

One shot is all that’s left to ThorSport Racing driver Ben Rhodes when it comes to qualifying for the NASCAR Gander Outdoors Truck Series Playoffs for the third straight season.

There’s one race left in the regular season, Saturday’s Corrigan Oil 200 at Michigan International Speedway. In order to remain eligible for the series championship, Rhodes must win the event.

The 22-year-old from Louisville, Kentucky, isn’t new to the pressure of a late run to make the Playoffs. In 2017, he edged Ryan Truex for the final spot on a tiebreaker. Last year, he qualified with a victory at Kentucky in the 12th race of the season.

But Saturday’s task is exponentially more difficult. Six drivers — Austin Hill, Johnny Sauter, Brett Moffitt, Ross Chastain, Tyler Ankrum and Stewart Friesen — already have clinched spots in the postseason with victories. Grant Enfinger will wrap up the regular-season points title and a Playoff spot when he takes the green flag at Michigan.

That leaves one berth left for Rhodes, or anyone else. If there’s no new winner other than Enfinger, two-time series champion Matt Crafton will make the Playoff field. And if Rhodes does win, he will dislodge Crafton, his ThorSport Racing teammate, from a chance to win a third title.

That’s a lot to digest, but Rhodes is single-minded in his approach. And part of that is standing his ground against aggressive competitors.

“I’d hate to sound like I’m a bad guy in NASCAR, ‘cause I’m really not, but we’ve just been pushed around so much,” said Rhodes, who numbers boxing among his off-track hobbies. “I was told as kid a kid that, if you’re going to take stuff from people, you’re going to be taking it your whole life.

“So we’re just standing up for myself and my team.”

And perhaps that will leave Rhodes as the last man standing when it comes to making the Playoffs. 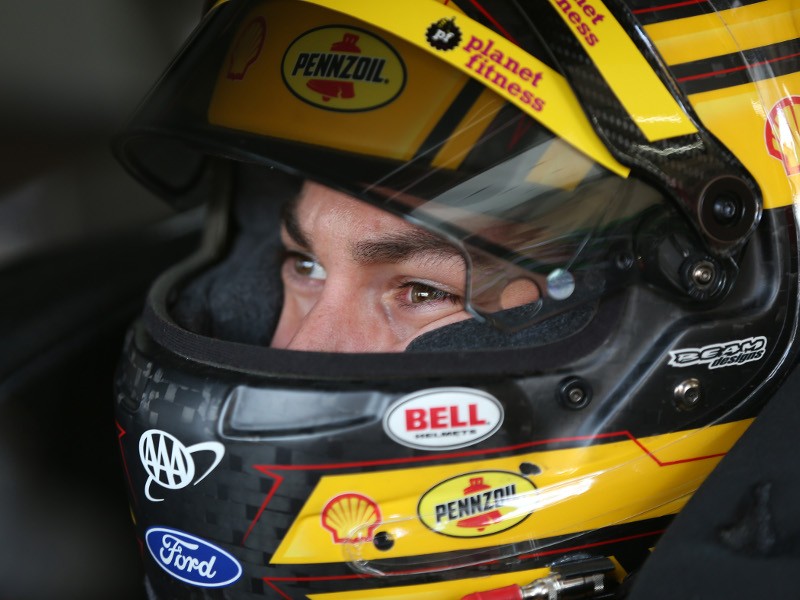