The Red Elephants (1-10) stay in Nicholson's face all night, holding him to just 6 points -- all in the first quarter -- en route to a blowout first-round win and a trip to the semifinals.

"That kid is so dynamic," Gainesville coach Chuck Graham said about Nicholson. "Really, I haven't seen anything like it in a while. You know for a kid to be able to stroke it like he does. So, yeah, a big part of the game plan was to kind of take him away. I knew we wouldn't be able to stop him, but just make everything tough for him. The kids responded."

It was also Big Red's first win of the season.

"It feels awesome but I'm more happy for the kids because they kept the right attitude and learned the lessons the hard way and they still stayed the course," Graham said about getting the first win of the season. "That's what we've been preaching since Day 1 -- no matter what adversity you're facing, stay the course. So I'm real happy that we got a W tonight."

Gainesville will play Cherokee Bluff in the semifinals on Saturday at Johnson. Tip-off set for 8 p.m.

"That group will be ready," Graham said about Bluff. "I know they'll be well-coached. I've been on that sideline before, so I know the preparation and what goes into it. We'll definitely have to be on top of our game tomorrow."

But it wasn't all bad for the War Eagles. They stayed close in the first half, taking a 17-14 lead late in the quarter off a Jonah Bull 3-pointer. And a 21-20 lead to open the second quarter.

Gainesville's athleticism started to shine through as the Red Elephants mounted a 12-1 run to take a 12-point halftime lead, 36-24.

The second half got out of hand in a hurry.

Robert Reisman hit 9 straight points in the third quarter to help the Red Elephants blow open the game, 55-30, by the end of the third. He scored a game-high 24 points. Eli Pitts added 13.

The Red Elephants held Chestatee to just six third-quarter points while outscoring them in the second half 39-16.

Despite watching a miserable display at the free-throw line, Johnson boys coach Chris Guthrie never had a doubt when senior Jesse Harbin stepped up with just 2.5 seconds left and the Knights trailing Lakeview Academy 60-59 in the quarterfinals of the 60th annual Lanierland Tournament.

“In practice, Jesse wins a lot of the free-throw contests we have. I felt good about it,” said Guthrie, in spite of the Knights being just 3-for-9 for the game at the time.

Harbin’s first attempt rolled around the rim once before falling through and his second was nothing but net to give Johnson a 61-60 lead and eventual win after a last-second heave by Lakeview hit the rafters.

The win pushed the Knights (3-8) into the semifinals for the first time since winning the title in 2014. They will take on the East Hall-West Hall winner at 5 p.m. on Saturday at Johnson.

“Just a huge win for this team and the program," said Guthrie, who is in his first season with the Knights. “A win like this in this kind of atmosphere may be the thing that gets this group going.”

It seemed an improbable finish after the Lions (5-8) had taken a 50-40 lead late in the third quarter on a Conley Millwood 3-pointer to cap a 13-2 run. But Guthrie, who called a timeout, told his charges to go back to the basics.

“Take things one possession at a time and start playing some defense,” he said.

The Knights responded with an 11-0 run, fueled by three Lakeview turnovers and capped by a Caleb Jackson steal and dish to Josh Flores for a layup.

But they would not score again. In fact, the two teams combined to go 0-for-7 from the field over the next two minutes. Harbin broke the drought converting a three-point play with 40 seconds left to close the gap to 60-59 and the teams then missed three field goals until Harbin was fouled with 2.5 seconds remaining.

Harbin finished with 23 points, 10 coming in the fourth quarter and 15 in the second half, to pace Johnson. Jackson had 13 for the Knights.

Weidner led Lakeview with 18 points. Cooper and Millwood each poured in 14 points and the trio hit 10 3-pointers for the game. But the Lions also struggled at the line hitting just 6-of-16 and missed two one-and-one attempts in the final minute with a chance to add to their lead.

The Lions next will take on the East Hall-West Hall loser at 11 a.m. on Saturday at Johnson.

The Cherokee Bluff boys basketball team achieved another first with their first-ever trip to the semifinals.

The Bears (8-5) led from start to finish in taking the victory in the first round of the Lanierland Tournament at the East Hall gym. They will take on the Chestatee-Gainesville winner at 8 p.m. on Saturday as the tournament moves to Johnson High.

“It’s nice but we don’t worry about that kind of stuff,” Bears coach Benjie Wood said. “We’re just trying to play ball. We’re still young -- we played four freshmen -- and we’ve been battling injuries. Just focused on the next game.”

Cherokee Bluff opened the game with an 11-3 run, held off several North Hall charges before halftime, and then blew the game open with a 16-7 spurt to start the third quarter for a 49-31 lead.

After the Bears big run, they led 53-35 heading into the fourth quarter. The Trojans mounted once the last charge pulling within 58-48 late in the final period but could get no closer.

“I thought Griffin did a good job out there of playing under control,” Wood said. “I think this will help him because he had to play more with his brain than just his ability.”

The Trojans will take on the Chestatee-Gainesville loser at 2 p.m. at Johnson on Saturday.

West Hall hit 6-of-9 free throws in overtime to hold off the Vikings charge and advance to the semifinals of the Lanierland Tournament.

"Our Achilles heel in recent games," West Hall coach Bobby Pless. "Free throws have hurt us, but Sawyer Passmore was 3-of-4 in overtime was big."

"Day 1 is the hardest, in my opinion, and drawing East Hall at East Hall was maybe the toughest matchup of all games -- battling the home team on their court," Pless said. "At the half, we knew East would not go down without getting after us in the second half, and we got sloppy and they made their run."

After falling behind 12 points at the half, the Vikings mounted an 11-2 run in the third quarter behind a tenacious defense and key play on the boards.

TJ Campbell started the flurry when he nailed a 3-pointer with 3 minutes to go. Then a series of offensive fouls, forced turnovers, two Malachi Vance blocks and a Vance dunk with 1 minute left in the quarter cut the Spartan lead, 42-37.

West Hall's Tilil Blackwell hit a buck with 33 seconds to go but Christian Torres answered with a shot in the paint at the buzzer, cutting the Spartan lead back to five points, 44-39.

In the fourth, the Vikings' Imre Earls opened the quarter with a 3-pointer from the corner, then the back-and-forth began.

Sawyer Passmore hit for two, then Clete Cooper answered. Andrew Malin answered Cooper with a 3-pointer to push the Spartans' lead back to 5, 50-45, with 2:08 left. Malin's bucket was the last for the Spartans in regulation, and the Vikings took advantage of it.

Campbell splashed a 3-pointer and Earls cashed in a Spartan turnover with 40 seconds to go to tie the game.

In overtime, the Vikings were 0-for-5 from the foul line, including three Campbell misses from the charity stripe that would have tied the game with less than a minute to go.

"I thought our guys refused to give in even when East tied it up," Pless said. "Canaan Koger challenged teammates in timeouts to stay in the game mentally and Quincy Holcomb at end of regulation told the team, "alright, we let a lead go, but we're winning you this in overtime. "

Sawyer Passmore led the Spartans with 15 points, and Quincy Holcomb added 11. TJ Campbell was the top scorer for the Vikings with 17 points. Earls finished with 10, Torres had 9 and Vance scored 6,

West Hall will play Johnson in the semifinals on Saturday at 5 p.m.

"I know it's going to be a battle playing Round 2 on the opponents' home court, but hey, we are giving all we have," Pless said.

East Hall will play Lakeview in the consolation bracket at 11 a.m. 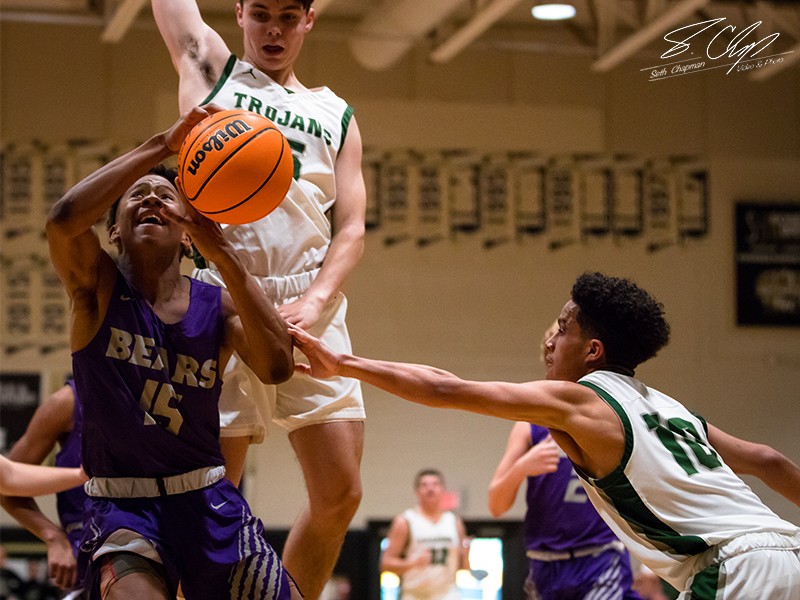