New Holland: 'If you met the standard, you worked hard'

The smokestack of the old Pacolet Milliken mill towers over Jesse Jewell Parkway, still operating as workers make yarn and textiles in the factory almost 150 years after construction began on the operation. Just as the plant continues to chug along each day, the Millikids who grew up in the little community of New Holland continue to carry on its legacy.

With humble beginnings as a health resort, Vic Wilson, a Millikid who grew up to become a town historian and has written three books about New Holland and the memories he and his friends share, said the area attracted big business with Limestone, Spring and another unnamed spring meeting near where the mill was built and supplying the pump house.

“That spring water and the mud, I’ve read it, I’ve seen it, every brick that you see, whether it’s the gym, the mill, the big [Milliken] office, the store and much of it went to Gainesville Mille, came from those three springs and those bricks that were formed right here, on the ball field.”

The unincorporated community has always had a strong sense of, well, community, especially since plans for the factory were conceived between the Montgomeries, the Millikens and the Pacolet families after the civil war.

Wilson said ironically, Mr. Montgomery was a Confederate soldier, he still went to meet and do business with Mr. Milliken, a northern aristocrat.

However, the community was not without setbacks. Shocked by a twister in 1903 and by the locally famous 1936 tornado, Wilson said the 1903 tornado destroyed 70 homes, killed roughly 100 people and damaged the newly built mill, leaving just the water tower untouched. The top level of the mill was taken out by the 1936 tornado, losing some community as well. However, Wilson said the Pacolets, the Millikens and the Montgomery family chose to restore the mill and build the methodist church, as well as the first school building between the Helen and Cornelia railroad tracks, the shops, post office, barber shop and other buildings.

“The South and the North got together and restored hope to give these people a new life,” said Wilson. “And it was a community, it was their families, and I don’t think there was any budget. They said go build, go restore, go do, and that’s what Mr. Montgomery did.”

Following the 1903 tornado, Mr. Montgomery actually died restoring one of the buildings of the mill, falling from a scaffolding, according to Wilson.

After growth in the area, a second school replaced the first school, which was later turned into an apartment complex, but was eventually torn down. The main school was built in 1938 and last until 1971, until White Sulphur Elementary was built. Now, New Holland Knowledge Academy sits a stone’s throw away from the mill on Jesse Jewell Parkway.

LOOKING OUT FOR EACH OTHER

Wilson's first book, Millikids, shares stories from his childhood and includes people who were instrumental in their lives. That includes Miss Icie, a neighbor who suffered from polio and couldn't walk.

"She prayed for us everyday, she opened her door to her house to us everyday," said Wilson. "We just didn't realize it then how blessed and how lucky we were for not only her but others who looked over us every single day.”

Wilson said New Holland was the best place to grow up. “We were poor but we didn't know we were poor," said Wilson. "We had everything we needed. We didn't have everything we wanted. But we were Millikids and our parents worked in the mill - that was one of the conditions of living here, your parents or one of them had to work there.”

Wilson’s mother and father toiled in the mill, with his father spending 47 years there and Wilson himself pitching in two years before enlisting in the Navy.

A few years ago, he was able to take a tour of the current facility. He said it not only still smelled like the cottonseed oil he remembered, but the spirit of the workers was there too. “To me that just make it more valuable. To be able to look at this community and see that Warner Brock taking the gym up there... he has a therapy center. He spends his effort and time helping people. And I think that’s one of the main things about this village is it was built to help people. Send ‘em to church, send ‘em to school, send ‘em to work.”

That full circle sense of community meant everybody watched out for each other. "No matter where you went, someone was looking after you or over you," said Wilson, in regards to his second book, Millimoms. "And they didn't mind disciplining you if they had to. I think there's 69 Millimoms in there and they're all just angels. They were heaven sent. They spent a lot of time and effort, blood sweat and tears not just in the mill but looking after us kids. That’s another thing we appreciate, I guess you could say they invested in us. We knew we were protected, we knew we were safe."

Across the street from the mill itself, the recreation center that was the hub for Millikids like Wilson has changed hands and uses over the years. Built in 1918, Wilson explained there was a now-empty pool in the basement, next to the decommissioned bowling alley. There were also spaces for shuffleboard, croquet, table tennis and more. Like Wilson said, the gymnasium is now being used as a full therapy center for Lanier Therapy in Motion. Brock obtained the building from his previous employer and continues to maintain it.

While the mill and the recreation building are the two most recognizable buildings as commuters drive down Jesse Jewell parkway, houses still remain occupied behind the old gym, the Baptist church still opens its doors every Sunday, and Frank Norton Jr. recently purchased the old Methodist church and is restoring it into apartments.

Wilson, who grew across the street from the church, was not so sure when he heard that news. But, when he was approached at another community event by Norton and others on the project who promised him they wouldn’t alter the exterior appearance of the craftsman style church, he relaxed. Now, he said he looks forward to new community members living in and loving the community he cherishes.

Another Millikid and arguably New Holland's most famous resident, Doug Ivester, has put his stamp on his hometown, making a sizable donation to Brenau University to turn a parcel next to the factory back into a ball field for the softball team.

"Well it didn't really change me as a person because I really wasn't a 'person' then, but I think it did give me some really foundational beliefs and foundational principles, which probably have lasted my entire life,” said the Brenau University Trustee.

"One was honesty, it was a very honest environment. People were straightforward, they were honest about their opinions. Second, it was a trusting environment. You trusted people until they were not worthy of your trust, but you started out with the basic belief that the person across the street, they could be trusted. And I think the people in New Holland were very caring and they tried to teach you things along the way. They didn't teach you because they were responsible for you, but because they wanted to.”

"We were at New Holland Elementary School together. Her last name was Grindle, my last name is Ivester, I, G, you get seated in alphabetical order, so I sat right in front of her. And in the third grade, I was obviously very attracted to her. And at the time you had little books and you exchanged pictures when you took school pictures and there's a page in there for 'my girlfriend' and in my book, there's a picture of Kay in the third grade.”

The rest is history. To honor their families and the community that brought them together, the ball park was named after Kay’s father.

“In the case of the ball field, there was a need for Brenau to have a first class sporting facility for their softball team. Their women's softball team is world class, so they needed a place to play and a place to practice. So working with Brenau, we decided to fund the ball field,” said Ivester. “I wanted to do something to honor Kay's father and we chose to name the field after him - Ernest Ledford Grindle Field. He lived across the street from the field and Kay lived across the street from the field so it was a natural thing for us to support it.”

Ivester said his father-in law was in vending, with Milliken as one his clients. Meanwhile, his own father worked in the mill for 43 years and retired there.

The former Coca-Cola CEO is no stranger to hard work. He said watching his and his wife’s families work impacted how he viewed his own career.

THE VALUE IN A NEW NEW HOLLAND

As for the future of New Holland, Brenau University and the Northeast Georgia Medical Center have both put their hands out to join in the community. Wilson said he was grateful to see investors like the Ivesters, Norton and others come in to the community and make some changes.

“I certainly don’t want it torn down or destroyed or changed in that matter so when Brenau comes along, Doug Ivester, Kay Grindle, when Frank Norton comes along and they take on the sense of value in this community, what it meant to this area and to this country in a way, they know that there’s something still here and we appreciate that.”

Wilson said he never expected a McDonald’s or a Kroger to pop up in his childhood neighborhood, but even though things were expanding, they weren’t really changing.

“You know, it’s still in many ways what we grew up with but we know that change is inevitable. It’s just up to us to accept it and know they’re still trying to preserve our village and that’s, to me, still important. Milliken could shut their doors tomorrow and that mill could be some other industry, but they chose to still operate and I’m certainly grateful for that.”

Even through the changes, the duplexes of New Holland remain comfortable homes to those who live there, sprinkling the streets behind the rec building and leaving just as much of an impact as the towering

“Every home was a significant structure, they had families that just put this place together,” said Wilson. “It took a mill to raise a village and thank God we were apart of that village with so much history, so much to look back on, not to live back, but to remember the Milliken and Pacolet families, the Montgomeries, and they believed in this area and I believe it’s paid off.” 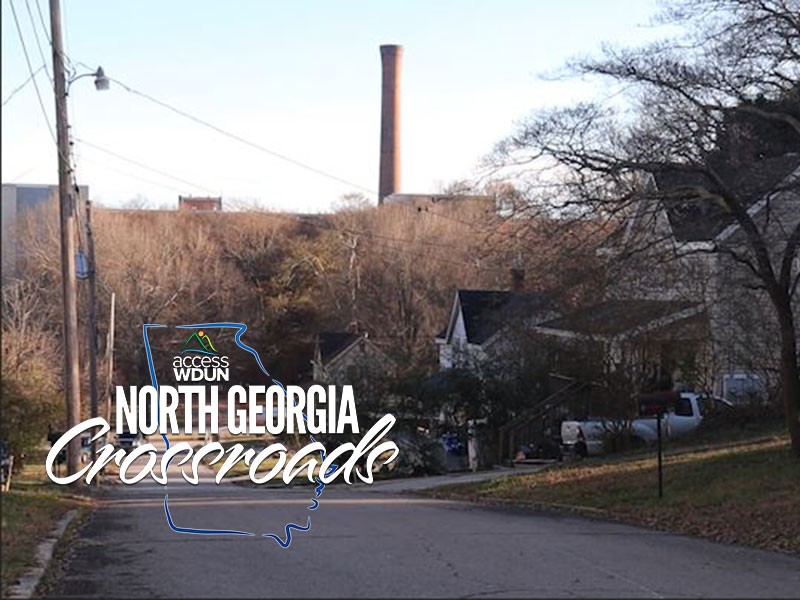 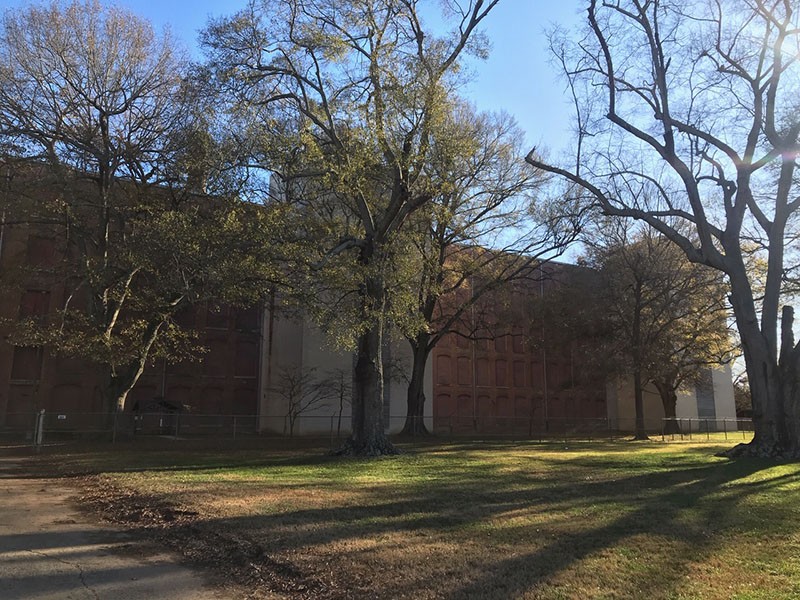 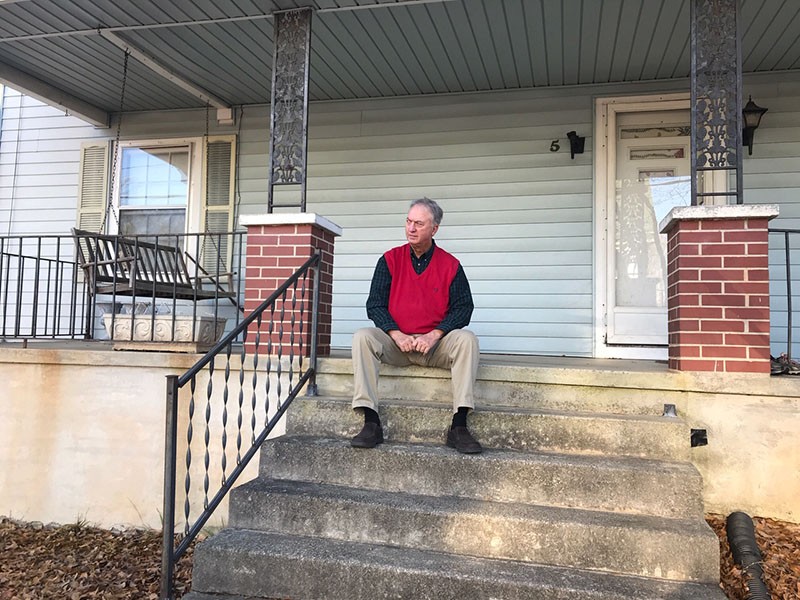 Vic Wilson at his former home in New Holland. 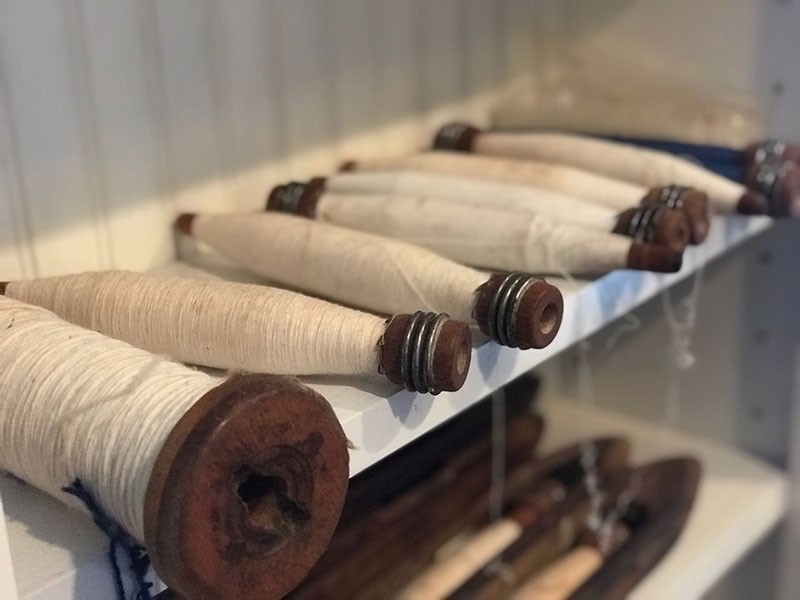 Spools of cotton thread in Wilson’s history room at the rec center. 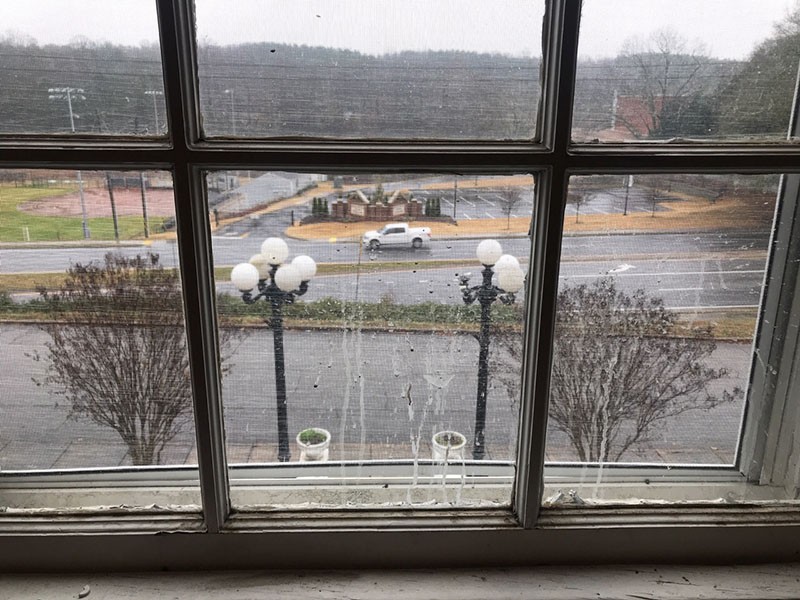 A view from the rec center of Ernest Ledford Grindle field. 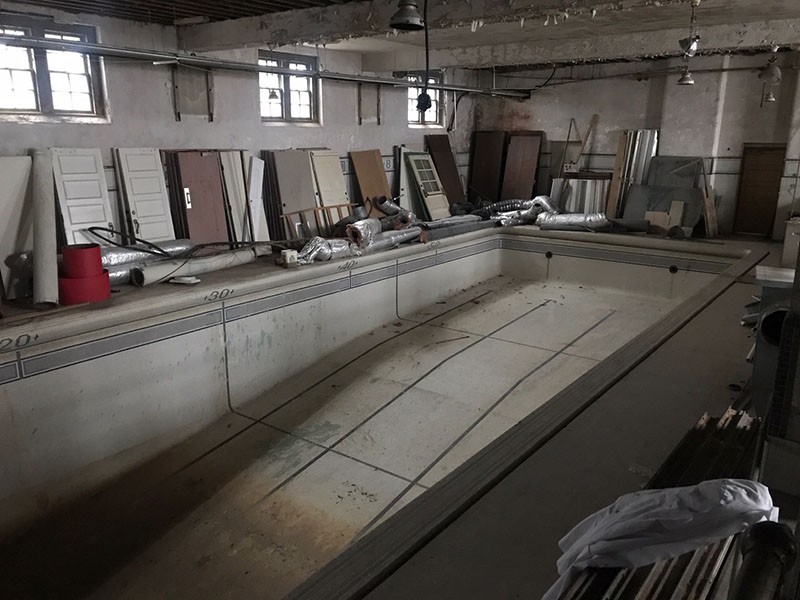 The former pool in the basement of the rec center. 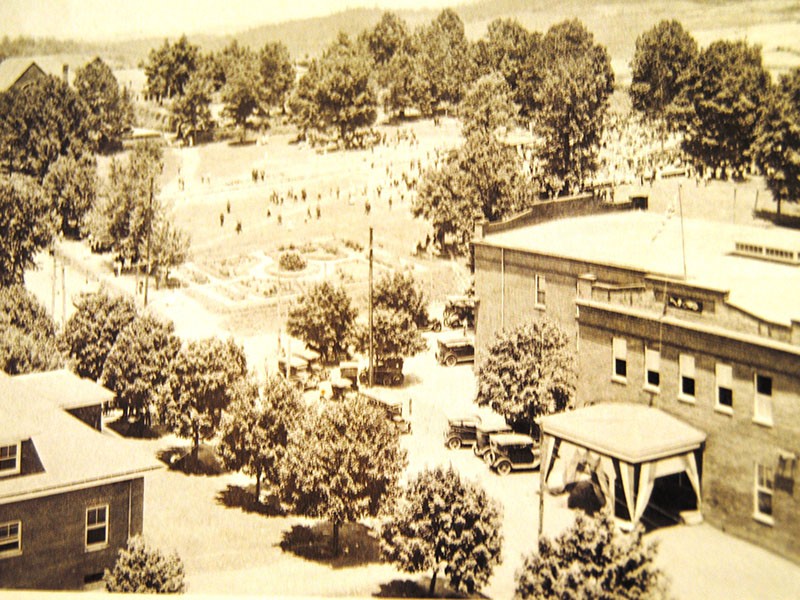 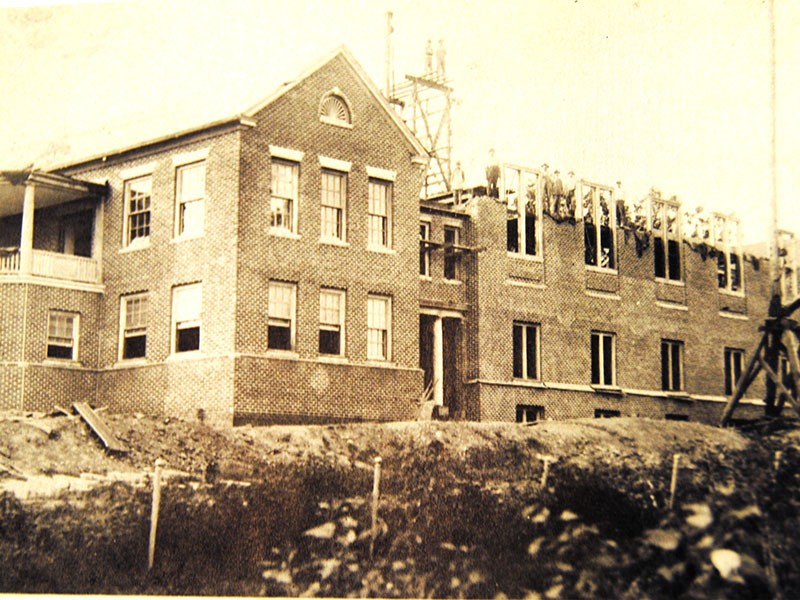 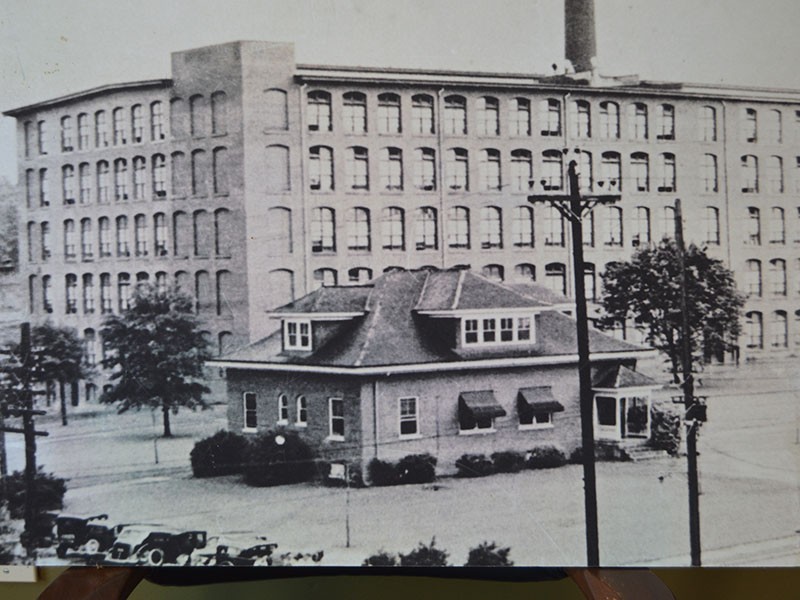 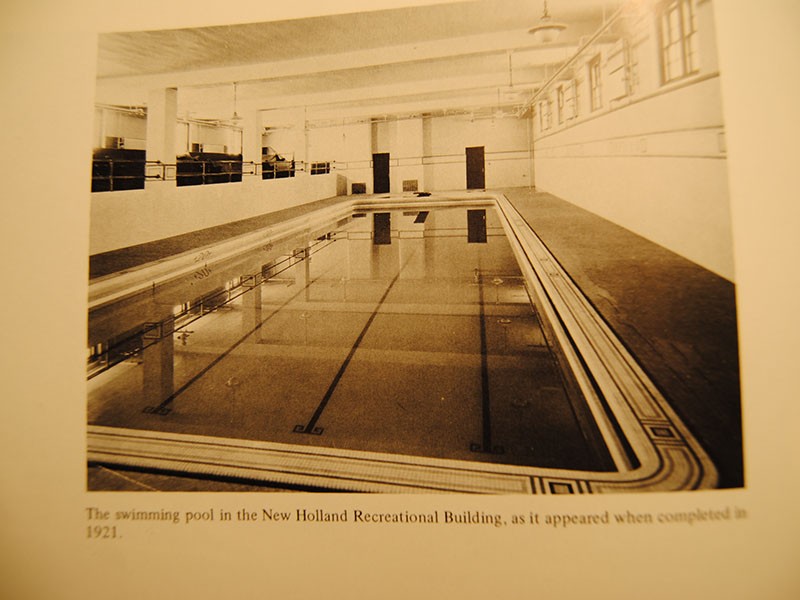 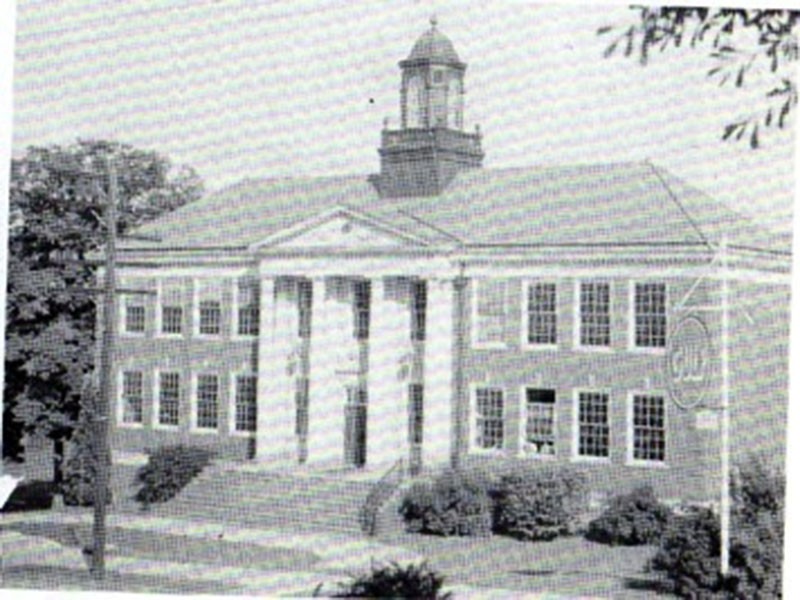