Six-Pack Sally hauled from Lake Lanier due to hazardous risks

The sinking houseboat allegedly traded for a six-pack of beer was removed from Lake Lanier Tuesday morning by efforts conducted by the Lake Lanier Association, the Georgia Department of Natural Resources and Hall County.

“Six-Pack Sally” was discovered at the shoreline of Lake Lanier near Aqualand Marina in Flowery Branch in the spring of 2019.

Abandoned boats are one problem on the lake, but sinking abandoned boats pose risks to the overall quality of the water, Jennifer Flowers the executive director of Lake Lanier Association said.

“Lake Lanier is our drinking-water source, and so with boats like these, they can put off oils, gases, battery acid, just a lot of pollutants. It’s a hazard to the water quality, but it’s also a hazard to safety,” Flowers said.

Boaters and swimmers on the lake who may not realize a sunken boat is below the surface could run risk of driving their boats over the wreckage or swimmers could face problems underwater—another reason why the boat needed to be removed, she said.

The removal of this particular boat was one-of-a-kind for the sheer fact the project was state funded. Typically, the owner of the boat is responsible for getting the vessel out of the water, which made this project the first-ever state funded boat removal; however, boat owners will not be able to abandon boats on the shorline of Lake Lanier without consequence, Flowers said. The Hall County Solicitors Office will continue to locate the owners of boats left behind and address the issue accordingly.

“We do know who owned [the boat], but she allegedly purchased it for a six-pack of beer and did not have the funds to remove it,” Flowers said. “She had great plans to live on the houseboat and fix it up and it just started to sink, and unfortunately became a very pricey problem.”

Last year, the association received $25,000 from the state that was allocated through DNR funding. Part of that money was used to remove the boat from Lake Lanier and was matched half-and-half with Hall County. The total cost to remove the boat was $10,000, Flowers said.

“It took a lot of our representatives and senators to rally around the issue, so through a Lake Lanier legislative caucus, they came together and decided this really was an issue in terms of abandoned boats being in our drinking water source,” Flowers said. “It’s not just our local drinking-water source, it provides drinking water for people all the way in Atlanta, so millions of people.

“Six-Pack Sally” was hauled from the lake by “Megalodon,” a barge equipped with a crane owned by TowBoatU.S., and loaded onto a transport truck. The houseboat was then delivered to a recycling yard for scrap metal.

“Buyers need to beware and always have a hull inspection completed prior to purchase whether the boat costs six figures or a six-pack,” Flowers said. 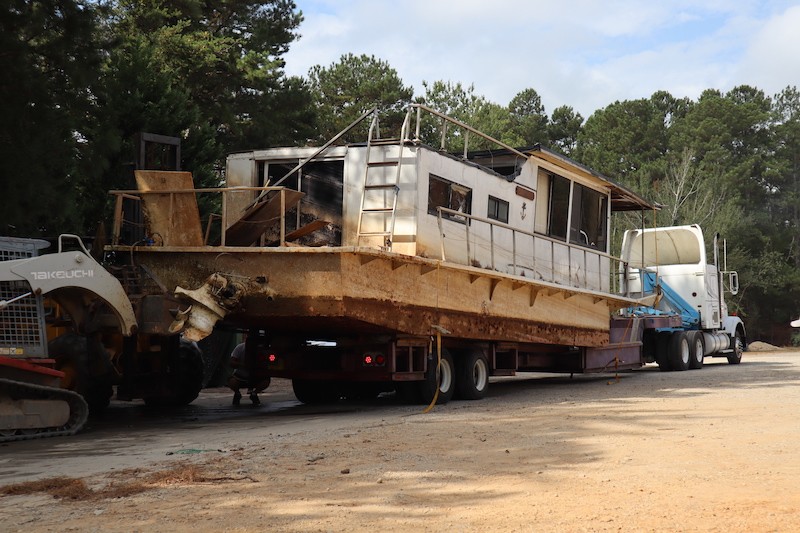 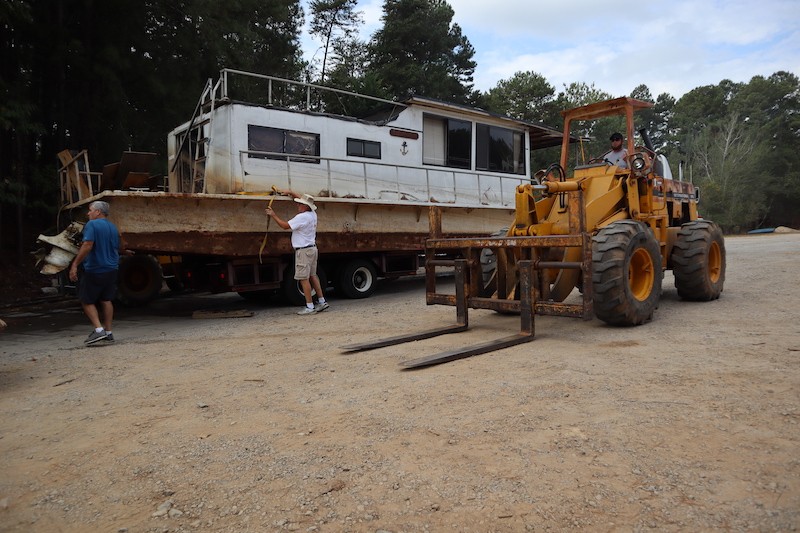 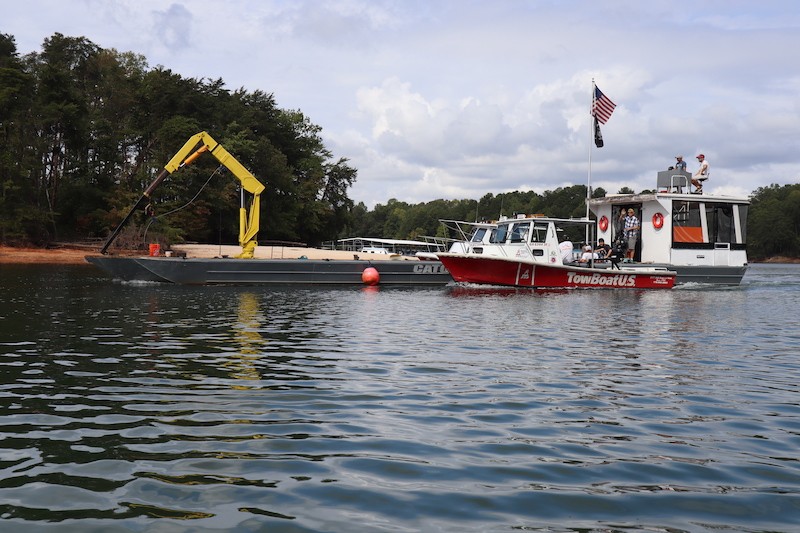 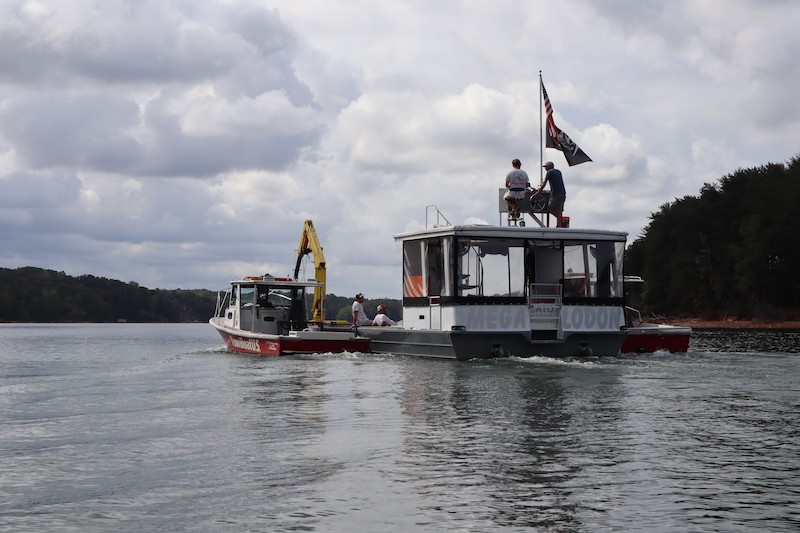 "Megalodon," the barge that held "Six-Pack Sally across Lake Lanier. 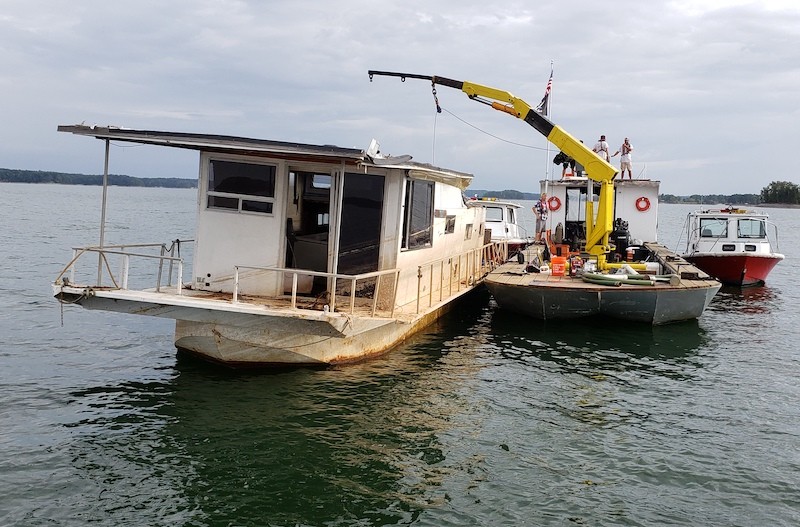 "Six-Pack Sally" being hauled by crane across Lake Lanier 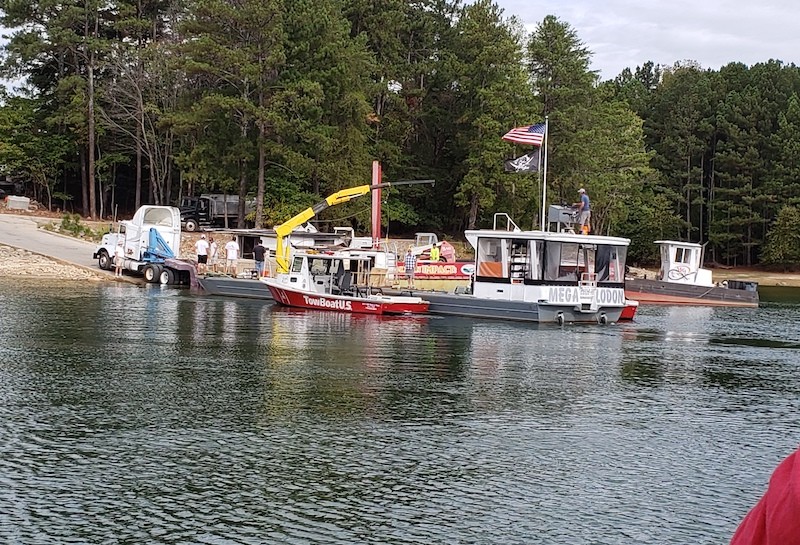 The houseboat being loaded onto the transport truck before heading to the recycling yard.