FLOWERY BRANCH — The Atlanta Falcons' offense went to great lengths during the offseason to improve in the red zone.

So much for that after Week 1.

The Falcons were held to 12 points in last week's loss, scoring just one touchdown in five trips inside the Philadelphia 20-yard line. They came away with no points three times and settled for a short field goal on another.

"It kind of goes without saying that we've put a good bit of work into there and we're not going to assess where we're at on one performance, but that part of our game needs to improve, and it certainly will," coach Dan Quinn said Monday. "We just know we have work to do in that spot."

Atlanta (0-1) is unlikely to catch much of a break this weekend when Carolina (1-0) visits Mercedes-Benz Stadium.

The Panthers' defense kept Dallas out of the red zone until midway through the fourth quarter when the Cowboys scored their lone touchdown. Carolina hit quarterback Dak Prescott 10 times and sacked him six times.

Falcons quarterback Matt Ryan was sacked four times and hit 13 by the Eagles. Two sacks came on the 12 snaps Atlanta took in the last two minutes as Ryan drove the offense 70 yards and ended the game with a short incompletion to star receiver Julio Jones.

Quinn was just as disappointed in the game's opening drive. The offense looked dynamic on its first seven plays, driving to the 1 on three long catches by Jones and two strong runs by Devonta Freeman, but the offense quickly stalled.

From that point on, Freeman ran just four times for 11 yards, and Tevin Colman had nine rushes for 19. Quinn stopped short of criticizing offensive coordinator Steve Sarkisian's play-calling before adding that Atlanta must do a better job of balancing its attack to blend in more runs.

It will be tough against Carolina, which ranked No. 3 against the run last year. Philadelphia ranked No. 1.

"When you play good fronts, it's hard to get the run game going, but you have to find ways to do it because eventually some of those runs break," Quinn said.

"Sometimes the zero run goes for 10. You've got to keep digging and taking your shots at it. It's a big part of what we do. We've got incredibly high standards for our run and how we do it and the way we feature the backs."

The offensive line has to do its part and stay on blocks to create some creases to exploit. Freeman and Coleman need to be more active in the screen passing game, too.

"We've just got to be effective early," left guard Andy Levitre said. "They've got a good front, so it's staying on guys and giving backs a chance to hit it and make some plays. Those guys are well capable of doing that."

NOTES: LB Deion Jones was held out of practice with a sore foot. Quinn said it was too early to tell if Jones will miss more time this week. ... The team signed LB Corey Nelson, S Keith Tandy and DE Steven Means as reserves. ... WR Christian Blake was signed to the practice squad. ... CB Deante Burton and long snapper Jeff Overbaugh were waived. 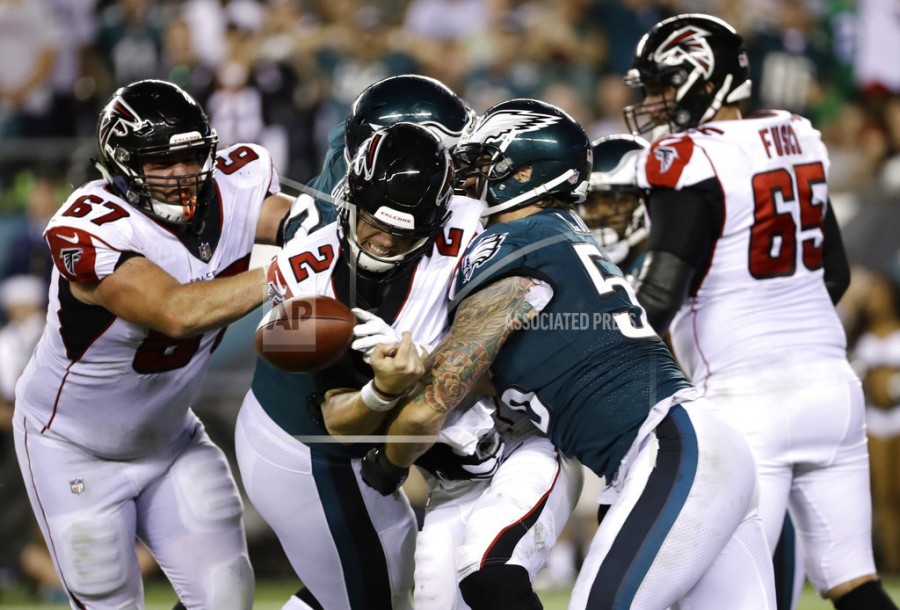 Atlanta Falcons' Matt Ryan (2) fumbles the ball after a hit from Philadelphia Eagles' Chris Long (56) during the second half of an NFL football game, Thursday, Sept. 6, 2018, in Philadelphia. The Falcons recovered the fumble.