JONESBORO — It’s been 40 years since Smokey & The Bandit was the second largest grossing movie of 1977, and the City of Jonesboro celebrated in a big way over the weekend.

Smokey & The Bandit, filmed largely in and around Jonesboro, with several scenes also filmed in White County, made household names out of Bandit, Snowman, Sheriff Buford T. Justice, and Big Enos and Little Enos Burdette.

Jonesboro officials joined forces with the Burt Reynolds Institute, Restore a Muscle Car, The Bandit Run, and the Snowman’s Run to Benefit Wounded Veterans to bring the Bandit himself, Burt Reynolds, to Jonesboro for two days filled with special commemorative events.

The 11th-annual Bandit Run, sponsored by Restore a Muscle Car of Lincoln, Neb., drove in from Texarkana, meeting up with the Snowman’s Run, which came in from Tallahassee, Fla., arriving in Jonesboro on Wednesday to kick off the anniversary weekend.

At noon Friday, Reynolds had a front row seat as a double in a Trans Am and a driver in a rig re-enacted the Coors scene in downtown Jonesboro, as several hundred people watched and cheered from across the railroad. After the scene wrapped, Reynolds stepped down off the small stage and posed for a few photos with the car and those involved in the event.

Other Friday events included a barbecue for Bandit Runners at Jonesboro Fire Department, a car show, a question and answer session with Reynolds and Susie Ewing, who played Hot Pants Hilliard, and an official showing of the movie.

Saturday night, activities moved to Atlanta Motor Speedway for the Bandit Jump, a re-enactment of the movie’s iconic 150-foot Mulberry Bridge jump. Officials initially wanted to hold that event at its original location on the Flint River, but nature reclaiming the original site of the jump combined with widespread interest in viewing the stunt led to the jump being held at AMS.

Second only to Star Wars in 1977, Smokey & The Bandit was produced with a $4.3-million budget and grossed more than $300 million. It quickly created widespread appeal for the black 1977 Pontiac Trans Am, big rigs and CB radio culture. 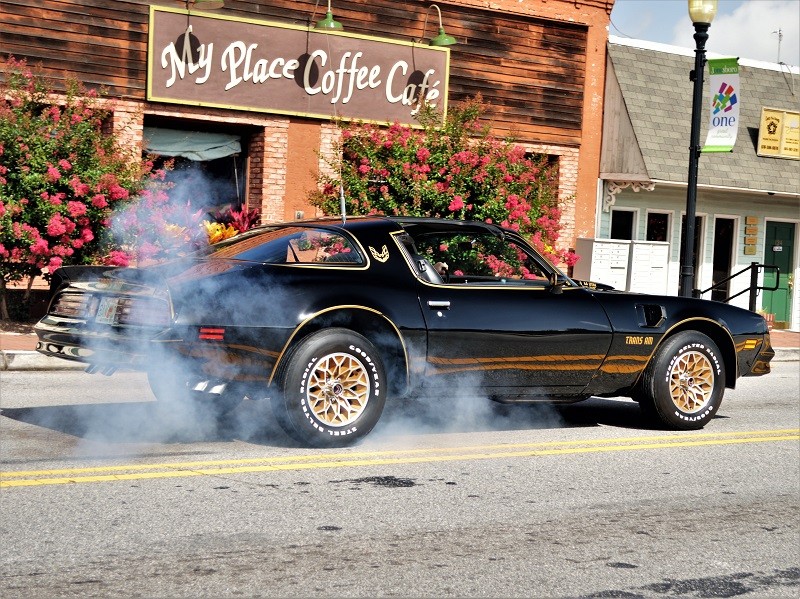 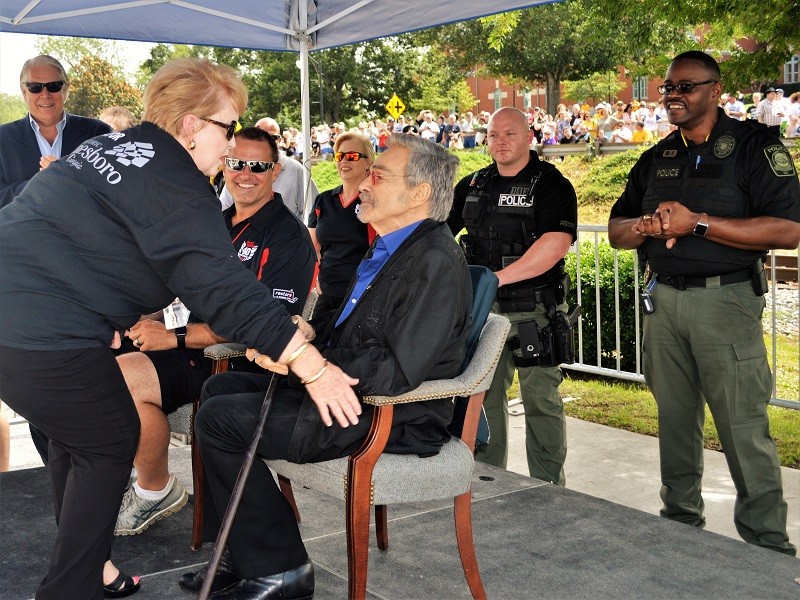 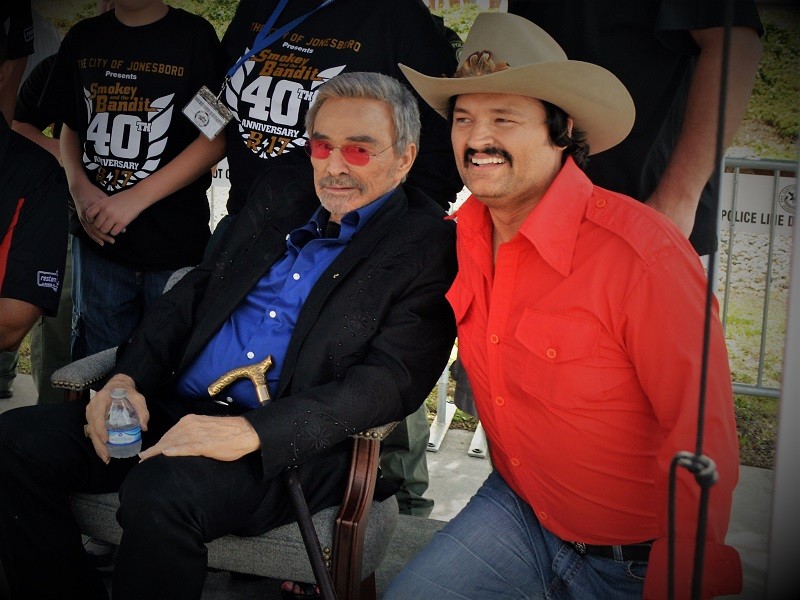 Burt Reynolds, the original Bandit, poses for a picture with the Bandit driving the Trans Am for Friday's movie scene re-enactment in Jonesboro. 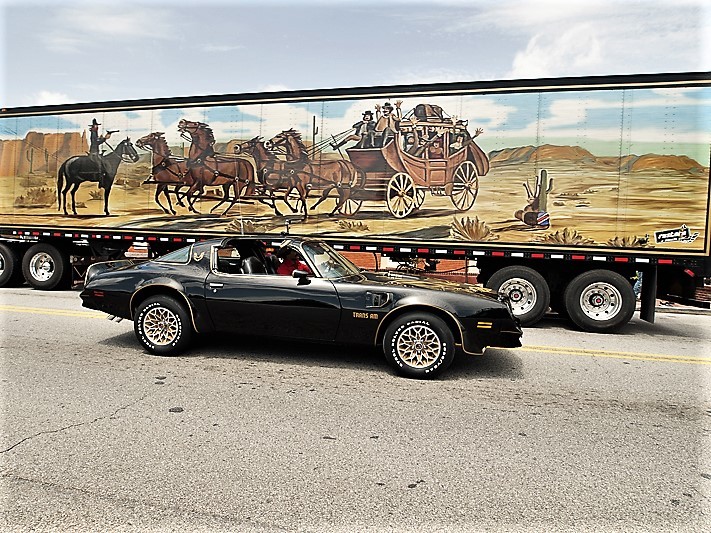 Iconic Smokey & The Bandit vehicles participate in the re-enactment of the Coors scene in downtown Jonesboro. 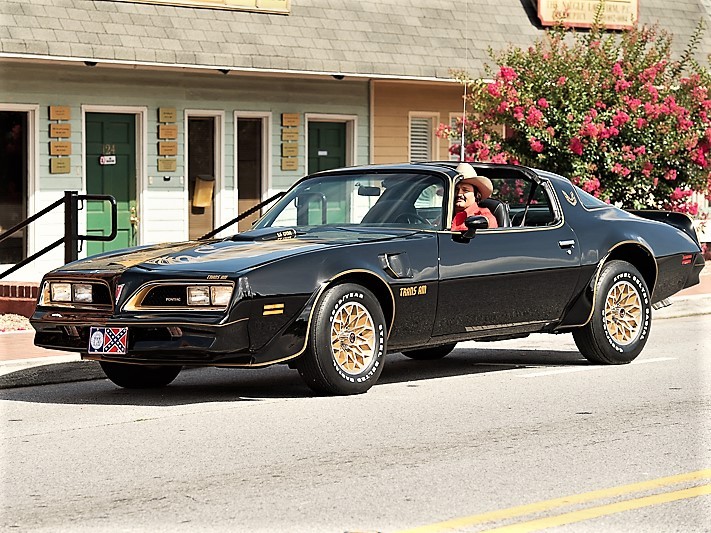 Friday's Bandit maneuvers the Trans Am into position during the Coors scene re-enactment on Main Street in downtown Jonesboro. 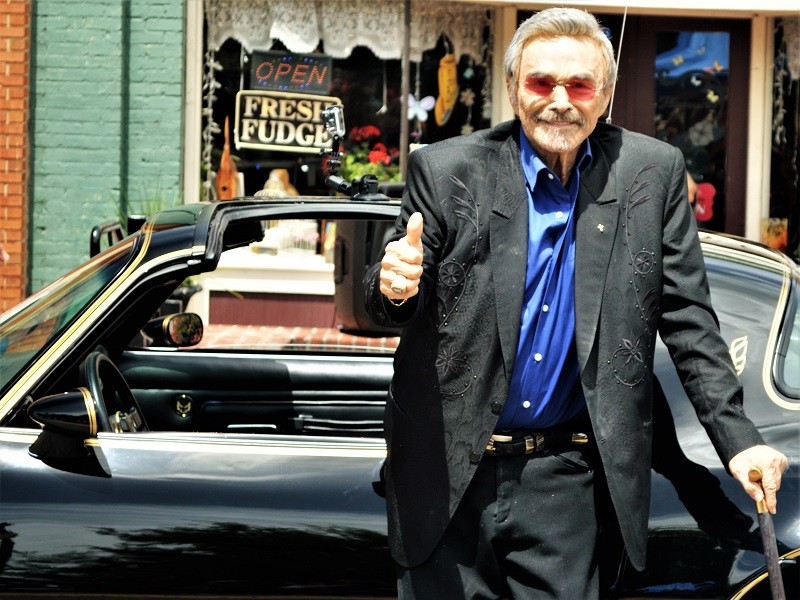 Burt Reynolds, the original Bandit, gives a thumbs up as he stands beside the iconic 1977 Pontiac Trans Am. 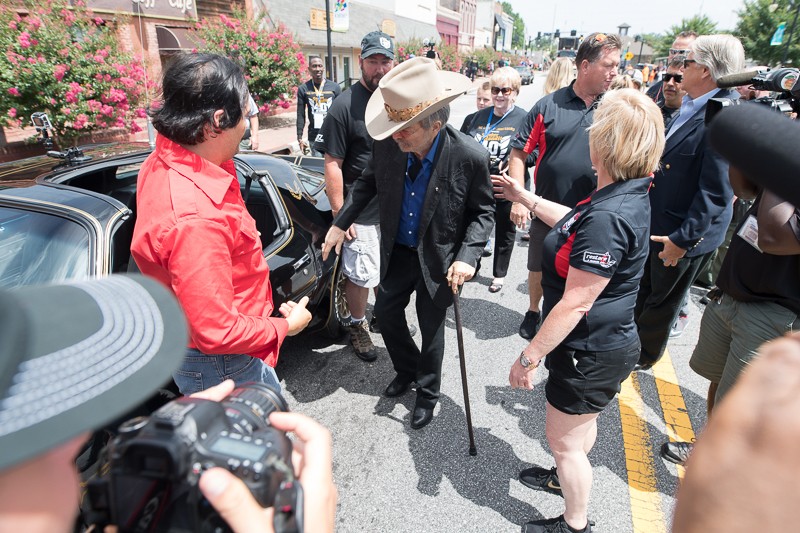 Months of planning pay off as film legend Burt Reynolds checks out the Trans Am used in Friday's re-enactment in downtown Jonesboro. 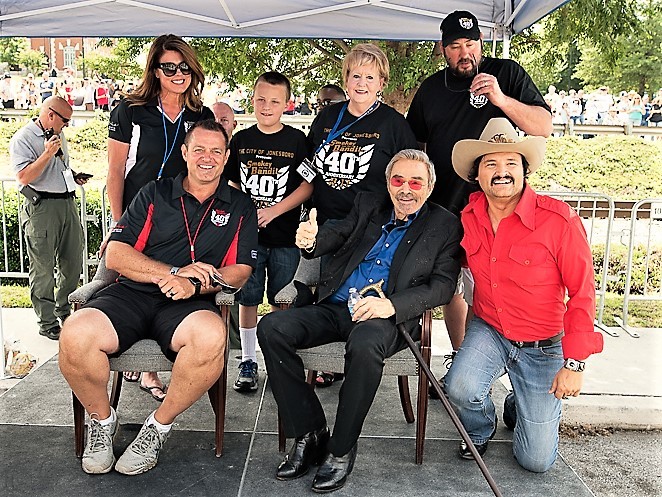 Actor Burt Reynolds is surrounded by some of those involved in making the 40th anniversary of Smokey & The Bandit happen in Jonesboro. 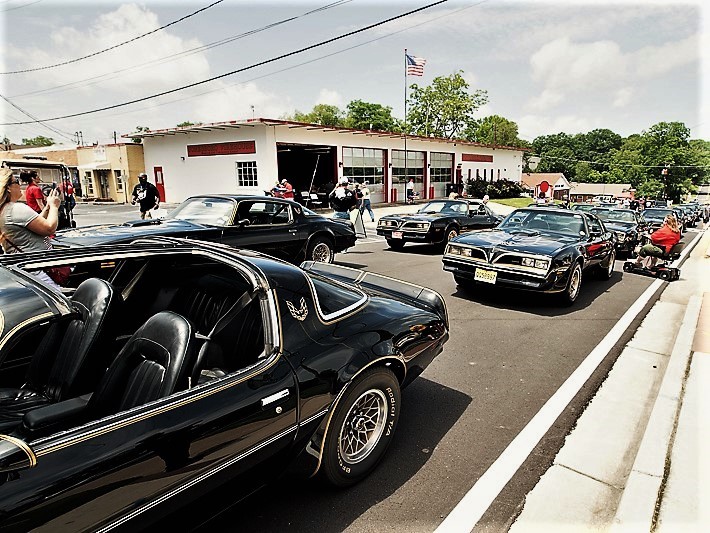 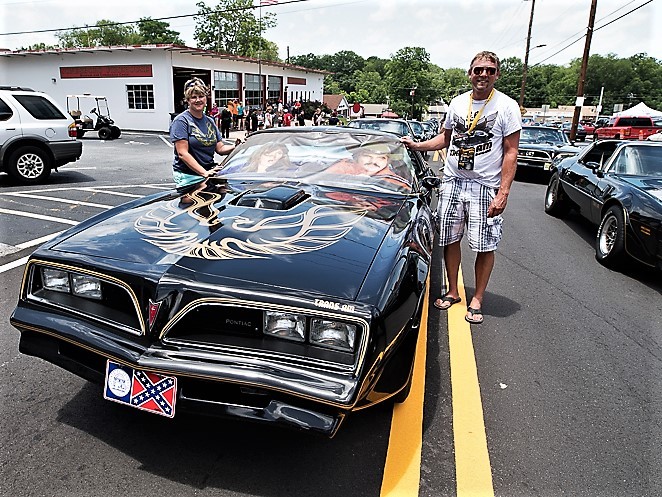 Kevin and Nicole Blalock of Banks County stand with their Bandit Trans Am, one of many lining Mill Street in downtown Jonesboro on Friday. 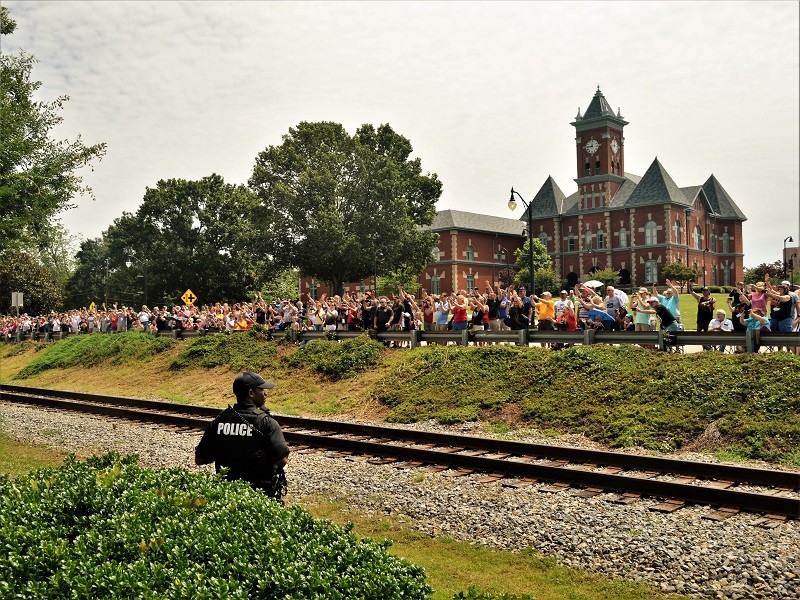 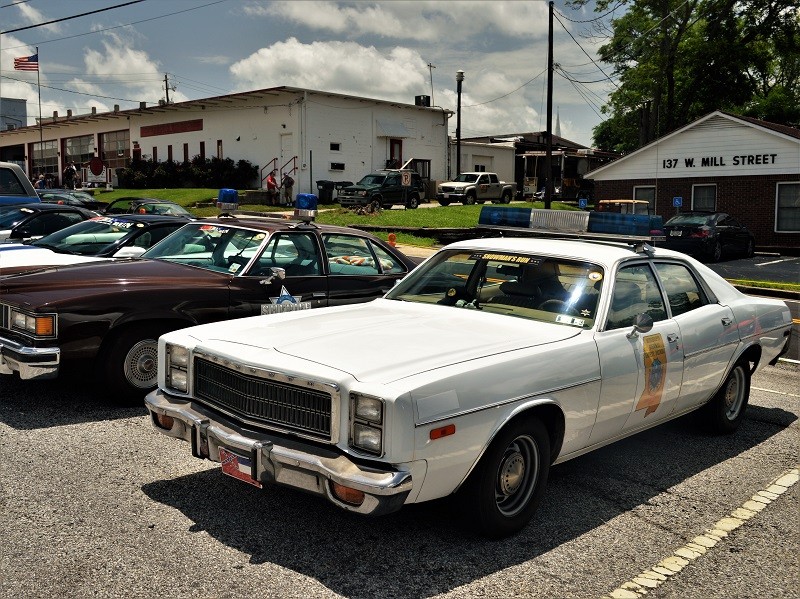 Replicas of the patrol cars used in Smokey & The Bandit are displayed in Friday's car show in downtown Jonesboro. 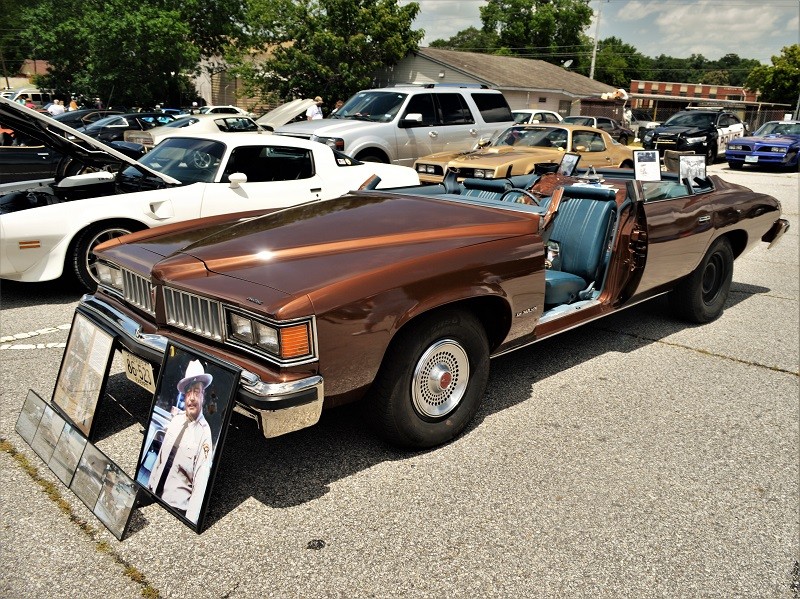 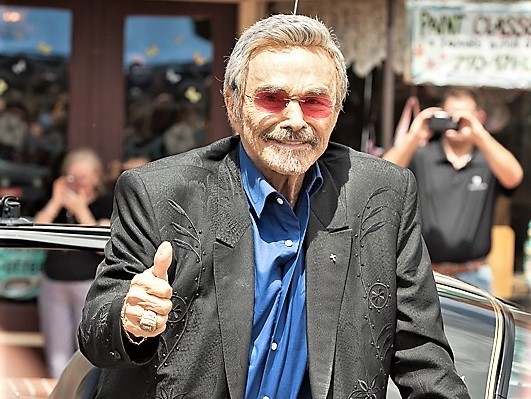 Forty years after portraying the Bandit on the big screen for the first time, Burt Reynolds is still all smiles.