Hawks' Horford to have season-ending surgery

By The Associated Press
ATLANTA -- Atlanta Hawks center Al Horford will have season-ending surgery on Tuesday to repair his torn right pectoral muscle.

Horford, the Hawks' leading scorer and rebounder, suffered the injury in the first overtime of Thursday night's 127-125 double-overtime win at Cleveland. An examination on Friday in Atlanta revealed the complete tear of the muscle. Horford explored his options before deciding on the surgery.

Hortford is averaging 18.6 points and 8.4 rebounds per game in his seventh season. He suffered a similar injury two years ago. He tore his left pectoral muscle early in the 2011-12 season, when he played only 11 regular-season games before returning in the playoffs.

Narin said Horford would not return for the playoffs this season.

The loss of Horford could be difficult to overcome for the Hawks, who are third in the Eastern Conference. The Hawks have split their first two games without Horford, beating Charlotte before losing at Orlando on Sunday.

Elton Brand, normally a power forward, has started the last two games at center but played fewer than 20 minutes in each game. He had only seven points and two rebounds in 14 minutes against Orlando.

The playing time of Pero Antic is also likely to increase. Antic , a 6-foot-11 center from Yugoslavia, is averaging 3.6 points and 2.4 rebounds in a reserve role. 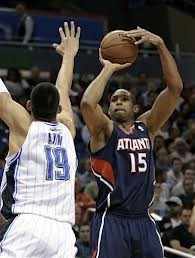