By Jeff Hart Sports Reporter
GAINESVILLE -- Buford junior Camille Anderson knows to forget about the past during games.

Just moments after missing a free throw with 46 seconds left in a tie game with Gainesville in the finals of the Big Red Shootout, Anderson found herself back at the free throw line with 7.2 seconds left and a chance at redemption.

"I was nervous but we're taught to forget the last play," she said. "I just went there knowing I had to make my free throws. I was hoping to redeem myself, that's for sure."

Anderson would sink both and then the Lady Wolves had to endure a last-gasp 3-pointer by Gainesville's Paislee Lee that bounced off the rim as time expired to steal a 33-31 win to capture the title.

Gainesville had led the entire game until Anderson banked in a spinning layup with 3:47 left to give Buford (9-1) its first lead at 31-29. The Lady Elephants' Kabree Randolph sank two free throws with 1:08 left to tie the game but the Lady Wolves would force two Gainesville turnovers in the final minute and hold them to no field goals over the final 10:08 of the game.

"Both teams played very good defense and I think both teams felt some pressure at the end," Buford coach Gene Durden said. "They'll call this one an ugly win but I really thought defensively it was a beauty on both sides."

Gainesville never trailed until the fourth quarter and led 9-5 after the first quarter and 17-14 at halftime. The Lady Elephants would build a 29-22 lead, their largest, on a Tanai Watson 3-pointer with 2:08 left in the third quarter but youth and inexperience over the final 10 minutes played a factor for Gainesville.

After attacking Buford's zone the entire game, Gainesville took the air out of the ball in the fourth quarter. But not by design.

"We wanted them to keep attacking but (the girls) kind of backed off a little," Gainesville coach Brenda Hill-Gilmore said. "I think it's something they can learn from. But overall I thought we played a fantastic game.

"Anderson is a beast and you can't hold her down an entire game. She made the key plays at the end for them."

Anderson finished with a game-high 12 points, including the final four to give her team the only lead it needed. The effort helped her earn the Chris Mance MVP award.

Gainesville (10-2) can take some comfort in knowing it went toe-to-toe with what many feel is one of the teams to beat in Class AAA.

"I think it's a moral victory to a certain degree," Hill-Gilmore said. "This team is growing up more with every game. They're a little down because they want to win. But there are a lot of positives we can take from this loss."

It was a defensive battle from the start.

It was nearly two minutes before either team scored -- a banked-in 3-pointer by Gainesville's Taylor Hawks. Buford would rally to tie the game at 5 on a basket by Corey Staples, but the Lady Elephants would hold Buford scoreless over the final 3:30 of the first quarter while building a 9-5 lead.

Gainesville would extend its lead to 17-12 late in the second quarter on a pair of free throws by Randolph and take a 17-14 lead into halftime. The Lady Elephants would use a 12-6 run in the third quarter to build their biggest lead but could muster just two free throws the rest of the way.

North Hall got 16 points from Katie Sayres, including four 3-pointers, to rally past Class AAAAAA Alpharetta in the fifth-place game of the Big Red Shootout.

The Lady Trojans trailed 9-7 after the first quarter but outscored Alpharetta 19-15 in the second quarter to grab a 28-24 healdtime lead. They extended the lead to 47-38 after three quarters and then held on down the stretch.

Sarah Cleveland and Sydney Cleveland each had 14 points and Kensi Gillespi added 12 points for the Lady Trojans.

Gainesville outscored the Raiders 20-11 in the fourth quarter to rally for the win in the fifth-place game of the Big Red Shootout.

Nam Van Dulm poured in 18 points to pace Gainesville. Luke Maddox had 14 points and Jay Gaudlock 10 points for the Elephants.

Devonta Cacock had a game-high 25 points to lead Alpharetta. Bryan Roberts added 10 points for the Raiders.

North Hall hit 11 3-pointers and led virtually from start-to-finish to grab a win in the seventh-place game of the Big Red Shootout.

Carson Heinen would finish with 28 points, including three 3-pointers, to lead the Trojans.

The Trojans also hit 25-of-38 free throws compared to just 11-of-21 for the Longhorns in the victory.

North Hall led 18-10 after the first quarter and opened up a 39-27 halftime lead.
The Trojans blew the game open in the third quarter with a 23-17 run and then held of a furious rally by Lanier in the fourth quarter.

Sam Jackson and Matt Booth each had 13 points for North Hall. Brock Wingo had nine points on three 3-pointers for the Trojans.

Paul Webb had 19 points to lead the Longhorns. Peyton Smith and Simon Shafack each scored 18 points and Derrick Brown had 14 points for Lanier. 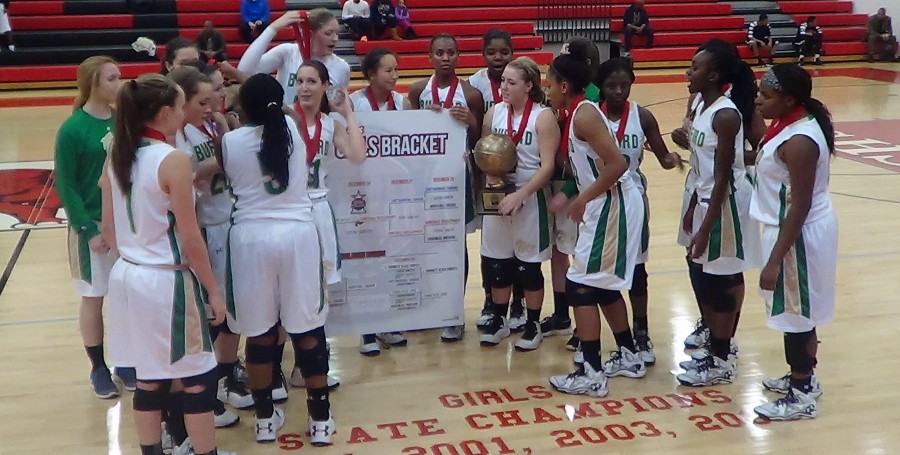