By Jeff Hart Sports Reporter
GAINESVILLE -- At 10-1 on the season after a nail-biting 52-50 win over Chattahoochee Friday night, a young Gainesville girls basketball team is showing it is good enough to win. Imagine what they could do when they mature.

Gainesville coach Brenda Hill-Gilmore was pleased with the final results in the Big Red Shootout semifinal game, it was the journey to the finish that had her shaking her head afterwards.

The Lady Elephants played near-flawless over a three minute stretch over the third and fourth quarters while building a 46-33 lead. That was offset, however, when they had to withstand a furious rally by the Lady Cougars in the final minutes to advance to Saturday's 7 p.m. final at the Gainesville gym.

"We're young and still learning," Hill-Gilmore said. "We did some good things and then we did some not-so-good things. We didn't rebound at the end and too many turnovers in that fourth quarter.

"But they're still growing as a team. They play hard. They stepped up and made a couple of plays at the end to win the game."

After Chattahoochee (7-5) pulled within 51-50 with 40 seconds left, Gainesville forced two key turnovers as Chattahoochee had a chance to take the lead. The Lady Elephants then played keep-away and ran out the final 25 seconds while the Lady Cougars were trying to foul.

"What I liked was that a lot of games are going to come down to the final one or two possessions and they didn't panic and found a way to win," Hill-Gilmore said. "This should give them some confidence that they can win these kinds of games."

They will need all the confidence they can muster in Saturday's final when they take on Buford (8-1) for the championship. The Lady Wolves advanced with a 42-22 win over Central Gwinnett in the other semifinal.

"Buford is a whole other level," Hill-Gilmore said. "They are tall, quick, play great defense, and really make you work hard. It will be a great challenge for us."

Gainesville led 28-17 at halftime and opened up a 33-19 lead on a basket by Breana Fair less than a minute into the third quarter. But Chattahoochee would storm back using a 14-5 run to pull within 38-33 with 1:11 left in the third quarter.

The Lady Elephants would respond with a 6-0 run in the final 38 seconds, including a long 3-pointer by Shikiya Brown at the buzzer to push the lead back to 44-33. Brown's 3-pointer kept the Lady Elephants a perfect 6-for-6 from 3-point line while Chattahoochee was just 2-for-12 at the time.

Gainesville looked in full control after a basket by Taylor Hawks made the lead 46-33 just moments into the fourth quarter. The Lady Elephants would hold on for dear life the rest of the way, though.

Erin Morrow led all scorers with 21 points, 19 coming in the second half as she sparked the Lady Cougars' comeback. Siena Gore had 14 for Chattahoochee.

Chattahoochee next will take on Central Gwinnett at 4 p.m. in the third-place game.

Chattahoochee would score first and take a quick 6-2 lead. But Gainesville would respond with a 7-0 run, highlighted by five consecutive points from Fair, to claim its first lead.

Chattahoochee would tie the game at 9 on a 3-pointer but the Lady Elephants answered with a 9-0 run, sparked by five straight points from Randolph, and never trailed again.

The Lady Elephants dictated most of the action, especially on defense, forcing 10 first-half Chattahoochee turnovers.

The boys 8:30 p.m final with have Central Gwinnett taking on Douglass-Atlanta.

Central Gwinnett used a 20-6 run in the fourth quarter to pull away for a 67-36 win over Gwinnett rival Parkview in one semifinal while Douglass opened the game with a 19-9 run and then held off a second half rally for a 65-63 win over Chattahoochee in the other semifinal.

The Lady Wolves moved into the championship game with a dominating win over the Lady Black Knights.

Buford led just 8-5 after the first quarter but held Central Gwinnett to single-digit scoring in every quarter. The Lady Wolves took a 21-11 lead into halftime and would led 27-16 after the third quarter.

The Lady Wolves put the game out of reach outscoring Central Gwinnett 15-6 in the fourth quarter.

Gainesville opened the game with a 20-8 first quarter and cruised to the win over its cross-town rival.

Jay Gaudlock paced the Red Elephants with 14 points, 11 coming in the second half. Ithello Cross added 12 points and Luke Maddox and JD Sosebee had nine points apiece for Gainesville.

The Elephants extended their lead to 35-17 by halftime holding the Trojans to single-digit scoring in each of the first two quarters.

North Hall outscored Gainesville 40-38 in the second half but could not make much of a dent in the Red Elephants' double-digit for most of the game.

Gainesville next will take on Alpharetta -- a 63-49 winner over Lanier on Friday -- in the fifth-place game at 2:30 p.m. Saturday.

North Hall will play Lanier at 11:30 a.m. Saturday in the seventh-place game.

Sydney Cleveland poured in 28 points, including six 3-pointers, to lead the Lady Trojans to the lopsided win.

North Hall used its defense to grab the lead holding the Lady Panthers to just 18 first half points. The Lady trojans led 20-7 after the first quarter and then took a 37-18 lead into halftime.

The Lady Trojans drained 10 3-pointers in the game, the second time in three games they have hit 10 or more 3-pointers.

North Hall next will play Alpharetta -- a 53-47 winner over Franklin County Friday -- at 1 p.m. Saturday in the fifth-place game.

Franklin County will take on Jackson County at 10 a.m. Saturday in the seventh-place game. 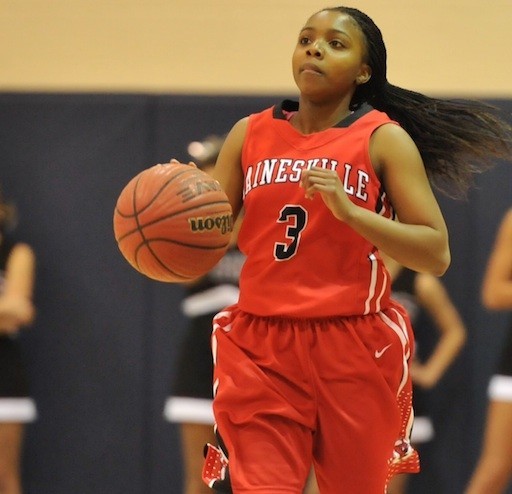