By The Associated Press
WASHINGTON - Secretary of State Hillary Rodham Clinton developed a blood clot in her head but did not suffer a stroke or neurological damage, her doctors said Monday. They say they are confident that she will make a full recovery.

In a statement that revealed the location of the clot, Clinton's doctors said it is in the vein in the space between the brain and the skull behind the right ear. She is being treated with blood thinners to help dissolve the clot, the doctors said, and she will be released once the medication dose has been established.

Clinton, 65, is making excellent progress and is in good spirits, Dr. Lisa Bardack of the Mt. Kisco Medical Group and Dr. Gigi El-Bayoumi of George Washington University said in a statement.

Clinton, who was spending a second day at a New York hospital, developed the clot after suffering a concussion earlier in December. She had fainted, fallen and struck her head at home while battling a stomach virus, her spokesman said. She has not been seen publicly since Dec. 7.

Phillipe Reines, her spokesman, said her doctors discovered the clot Sunday while performing a follow-up exam on the concussion. She was admitted to New York-Presbyterian Hospital.

Clinton's complication "certainly isn't the most common thing to happen after a concussion" and is one of the few types of blood clots in the skull or head that are treated with blood thinners, said Dr. Larry Goldstein, a neurologist who is director of Duke University's stroke center.

The area where Clinton's clot developed is "a drainage channel, the equivalent of a big vein inside the skull - it's how the blood gets back to the heart," Goldstein said.

Blood thinners usually are enough to treat the clot and it should have no long-term consequences if her doctors are saying she has suffered no neurological damage from it, Goldstein said.

Clinton had planned to step down as secretary of state at the beginning of President Barack Obama's second term. Whether she will return to work before she resigns remained a question.

Democrats are privately if not publicly speculating: How might her illness affect a decision about running for president in 2016?

After decades in politics, Clinton says she plans to spend the next year resting. She has long insisted she had no intention of mounting a second campaign for the White House four years from now. But the door is not entirely closed, and she would almost certainly emerge as the Democrat to beat if she decided to give in to calls by Democratic fans and run again.

Her age - and thereby health - would likely be a factor under consideration, given that Clinton would be 69 when sworn in, if she were elected in 2016. That might become even more of an issue in the early jockeying for 2016 if what started as a bad stomach bug becomes a prolonged, public bout with more serious infirmity.

Not that Democrats are willing to talk openly about the political implications of a long illness, choosing to keep any discussions about her condition behind closed doors. Publicly, Democrats reject the notion that a blood clot could hinder her political prospects.

"Some of those concerns could be borderline sexist," said Basil Smikle, a Democratic strategist who worked for Clinton when she was a senator. "Dick Cheney had significant heart problems when he was vice president, and people joked about it. He took the time he needed to get better, and it wasn't a problem."

It isn't uncommon for presidential candidates' health - and age - to be an issue. Both in 2000 and 2008, Sen. John McCain, R-Ariz., had to rebut concerns he was too old to be commander in chief or that his skin cancer could resurface.

Two decades after Clinton became the first lady, signs of her popularity - and her political strength - are ubiquitous.

Obama had barely declared victory in November when Democrats started zealously plugging Clinton as their strongest White House contender four years from now, should she choose to take that leap.

"Wouldn't that be exciting," House Democratic leader Nancy Pelosi declared in December. "I hope she goes - why wouldn't she?"

Even Republicans concede that were she to run, Clinton would be a force to be reckoned with.

"Trying to win that will be truly the Super Bowl," former House Speaker and 2012 GOP presidential candidate Newt Gingrich said in December. "The Republican Party today is incapable of competing at that level."

Americans admire Clinton more than any other woman in the world, according to a Gallup poll released Monday - the 17th time in 20 years that Clinton has claimed that title. And a recent ABC News/Washington Post poll found that 57 percent of Americans would support Clinton as a candidate for president in 2016, with just 37 percent opposed. Meanwhile, websites have already cropped up hawking "Clinton 2016" mugs and tote bags.

Clinton returned to the U.S. from a trip to Europe, then fell ill with a stomach virus in early December that left her severely dehydrated and forced her to cancel a trip to North Africa and the Middle East. Until then, she had cancelled only two scheduled overseas trips, one to Europe after breaking her elbow in June 2009 and one to Asia after the February 2010 earthquake in Haiti.

Her condition worsened when she fainted, fell and suffered a concussion while at home alone in mid-December as she recovered from the virus. It was announced on Dec. 13.

This isn't the first time Clinton has suffered a blood clot. In 1998, midway through her husband's second term as president, Clinton was in New York fundraising for the midterm elections when a swollen right foot led her doctor to diagnose a clot in her knee requiring immediate treatment.

Medical experts said the seriousness of a blood clot diagnosis varies widely based on where it is located.

Clots in the legs are a common risk after someone has been bedridden, as Clinton may have been for a time after her concussion in December. Those are "no big deal" and are treated with blood thinners, said Dr. Gholam Motamedi, a neurologist at Georgetown University Medical Center who is not involved in Clinton's care.

But a clot in a lung or the brain is more serious. Lung clots, called pulmonary embolisms, can be deadly, and a clot in the brain can cause a stroke, Motamedi said.

Beyond talk of future politics, Clinton's three-week absence from the State Department has raised eyebrows among some conservative commentators who questioned the seriousness of Clinton's ailment after she cancelled planned Dec. 20 testimony before Congress on the deadly attack on the U.S. diplomatic mission in Benghazi, Libya.

Clinton had been due to discuss with lawmakers a scathing report on the attack she had commissioned that found serious failures of leadership and management in two State Department bureaus were to blame for insufficient security at the facility. Clinton took responsibility for the incident before the report was released, but she was not blamed. Four officials cited in the report have either resigned or been reassigned. 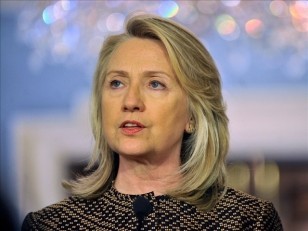