By Marc Eggers Anchor / Reporter
GAINESVILLE - Gainesville City Manager Kip Padgett says he is close to narrowing to a "short list" the candidates for police chief.

Speaking at Tuesday's Gainesville Kiwanis Club meeting, Padgett said more interviews are scheduled this week and after that "I'll sit down and look at everything and then we'll have a short list."

Padgett also said the budget for the city's public transit system - the Red Rabbit - is in limbo because the state Department of Transportation has not completed its budget. State DOT along with the federal government provide much of the funding for the buses. The Red Rabbit budget remains up in the air, Padgett said, until the city knows how much the state will be able to contribute this year.

The system is the frequent target of critics who note that there are usually lots of empty seats on the buses and it is operating in the red. But Padgett said there are very few public transportation systems that "break even." The only exception he could think of, he said, is the one operated by the University of Georgia.

Padgett said that due to efforts to streamline city government that began two years ago, Gainesville is now in better financial shape than a lot of similar cities.

"We've been able to keep our costs down ...and to maintain our level of services and not raise taxes. But," he cautioned, "we're still in a recession. Our revenue sources are down so it will be a challenging year." He went on to explain that the budget for the coming year is now under preparation, a process that takes two to three months.

One such budget consideration is that 18 new firefighters were hired last November. The city will now be able to staff all of its firefighting vehicles in a manner that the fire chief feels is safe. A federal grant currently pays those new salaries, but the grant diminishes over the next five years and Gainesville will have to gradually absorb those costs.

One area of potentially increasing revenues would be to do something about the fact that of the 4,000-plus businesses that are licensed by Hall County and the city of Gainesville, 952 of them are not registered with the state Department of Revenue. "What does that mean?" Padgett queried. "That means that 952 businesses have obtained business licenses, but they're not remitting sales tax information to the Department of Revenue. That's a lot of money!"

Padgett said that efforts are underway to help resolve that situation.

During the question and answer period, Kiwanis member P. Martin Ellard asked if it was true that city employees with ten years of service receive five weeks of paid vacation plus all paid holidays plus 40 hours of sick leave. Padgett said it was true.

"My thought is," Ellard said, "that if you could cut that five weeks down to two weeks like most people get, and raise the employees' salary a little bit, it would be a huge savings."

Others in the audience commented that they personally don't take all their vacation time. Padgett said that the employees' benefit package was under review. 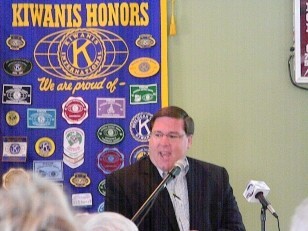