But when the smoke cleared Friday night only North Hall would advance to the second round.

Bobby Epps had three touchdowns as the Trojans rolled over visiting McNair 41-20 at The Brickyard. North Hall next will play host to Sandy Creek, which knocked off No. 6 ranked Hart County 23-8 Friday night.

Flowery Branch could not stop high-flying Chamblee as the Bulldogs scored 19 consecutive points en route to a 47-34 win at Falcons Field.

Gainesville had a rough night in Atlanta as Westminster started quick and never let up in routing the Red Elephants 48-8. White County was just 24 minutes from the biggest upset in the state leading Carver, Atlanta 13-0 at halftime. But the Warriors could not hold it falling 20-13 in overtime as Carver intercepted a pass in the first overtime to seal the win.

In other Class AAA action, Stephens County beat Cedartown 41-10 while Apalachee won its first-ever playoff game beating Haralson County 23-13. The Wildcats next will travel to Carver, Atlanta, who had to rally to beat White County 20-13.

In Class A, Jefferson won its first playoff game since 2003 pulling away from Bowden in the second half for a 24-13 win at Memorial Stadium. The Dragons (8-3) next will travel to Warrenton to take on Warren County (9-2) in the second round. Commerce, however, did not fare as well falling 16-14 to Gordon Lee on the road.

In GISA action, Riverside Military Academy fell to Pinewood Christian 28-19 at Maginnis Field in the first round of the playoffs. 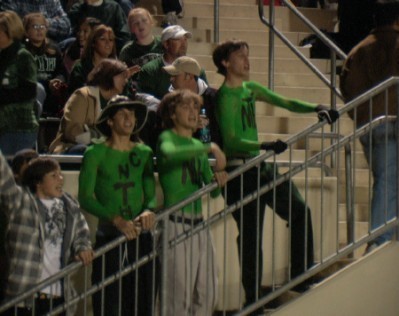