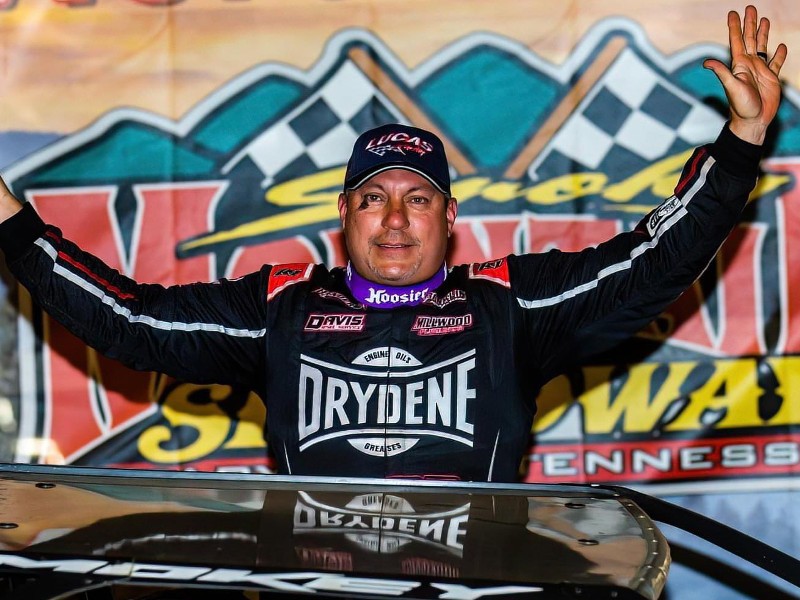 Madden made heavy contact with the fourth turn wall which allowed Jonathan Davenport to close the gap heading into the final lap. However, Madden held on for the win despite severe damage to the right rear of his No. 44 entry – crossing the finish line .355 seconds ahead of Davenport.

Brandon Overton took third at the stripe with Ricky Thornton, Jr. in fourth, and Mike Marlar in fifth.

Madden bolted from the pole position to grab the lead at the start of the 60-lap event. Davenport moved around Carson Ferguson on the second lap to take over the second position. Madden then began to put some distance between himself and the other contenders in lapped traffic. With 22 laps complete Davenport started to gain on Madden as he fought heavier lapped traffic before the second caution of the race flew just one lap later.

As the race continued, Madden still held the point, fighting off challenges from Davenport and Brandon Overton. As Madden approached the back of the field in the closing laps he made hard contact with the turn four wall while battling through lapped traffic. Madden held off a final bid from Davenport to claim the victory – the richest overall purse in the history of Smoky Mountain Speedway.

“I caught (Tyler Erb) there and I thought going down the back straightaway he was going to commit to the bottom, so I committed to the top and tried to get up beside him,” Madden said. “He made a lane change suddenly and I was running way faster than him. We had to get on the binders hard and I got loose, I just backed it in the fence. You know when you have (Davenport) and Overton chasing you then you’ve got it hit every mark and you had better not miss a mark if you do then they will get by you.”