Georgia cooperatives move to freeze nuclear costs at $8.1B 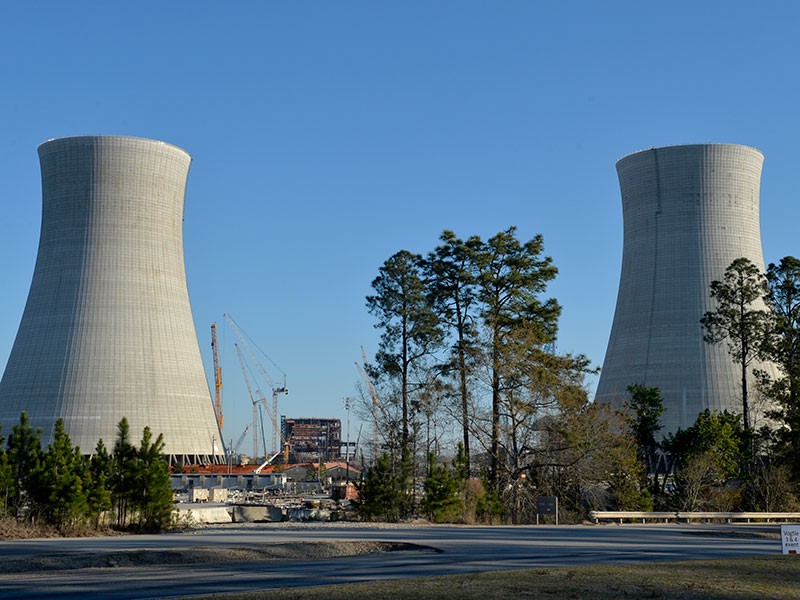 ATLANTA (AP) — One of the owners of a nuclear power plant being expanded in Georgia says it's shifting overruns to Georgia Power Co. in exchange for giving up a sliver of its ownership.

Oglethorpe Power Corp. which provides power to 38 electric cooperatives, said Saturday that it has exercised a contractual option to freeze its costs for Plant Vogtle at $8.1 billion.

Oglethorpe Power said it would save members at least $400 million. In exchange, Oglethorpe's ownership share of the two new reactors being built at the plant east of Augusta would fall from 30% to 28%. That would bump Georgia Power's share of ownership from 45.7% to 47.7%.

If costs rise further, Oglethorpe would save more, but give up a larger share of its ownership.

Oglethorpe, Georgia Power and Vogtle's two other owners — the Municipal Electrical Authority of Georgia and the city of Dalton — have been arguing over Georgia Power’s obligations to start absorbing more costs.

It was supposed to begin after more than $2.1 billion in overruns had occurred following a 2018 agreement. Oglethorpe says costs have risen by $3.4 billion since then. But Georgia Power has said COVID-19 was an act of God that drove up costs and delayed work, and it shouldn’t have to pay for that slowdown.

Southern Co. has acknowledged it will have to pay at least $440 million more to cover what would have been other owners’ costs, and has said another $460 million is in dispute.

Georgia Power spokesperson Jacob Hawkins said the company still has a “difference of opinion regarding whether the conditions for the tender have been satisfied." He said Georgia Power would respond to Oglethorpe.

Oglethorpe said Saturday that the dispute remained unsettled. “However, we expect our partner to honor their commitment and stand by the contract all co-owners signed in 2018,” spokesperson Blair Romero said.

The 2018 escape hatch was written when Oglethorpe threatened to withdraw from the project, which could have led to its cancellation. Georgia Power first agreed to pay increasing shares of Vogtle's cost beyond a certain point, costing Georgia Power $180 million without affecting others' ownership shares. Then the co-owners can freeze costs in exchange for owning less of the generating capacity.

Oglethorpe said Saturday that it expects to own 618 megawatts of capacity, down from 660 megawatts. The two new units at Vogtle are supposed to generate 2,234 megawatts.

Some of Oglethorpe Power's cooperatives have already been charging their members for Vogtle's construction costs. Oglethorpe President and CEO Michael Smith said the cooperatives remain “deeply invested in the success of these nuclear units” but said 4.4 million member owners had to be protected. Unlike Georgia Power, cooperatives don't have shareholders to fall back on.

Smith said the decision to freeze protects “consumers who can least afford increases in their electricity rates, especially in today’s economy.”

Vogtle's $30.34 billion cost doesn't include $3.68 billion that original contractor Westinghouse paid to the owners after going bankrupt, which brings total spending to more than $34 billion.

Vogtle is the only nuclear plant under construction in the United States, and its costs could deter other utilities from building such plants, even though they generate electricity without releasing climate-changing carbon emissions.

The Municipal Electrical Authority of Georgia, which owns owns 22.7% of Vogtle and provides power to city-owned utilities, hasn't said yet whether it will hand over part of its ownership to save costs. MEAG projects it will pay $7.8 billion.

The municipal utility in Jacksonville, Florida, as well as some other municipal utilities and cooperatives in Florida and Alabama are obligated to buy power from the plant.

When the project was approved in 2012, the reactors were estimated to cost $14 billion, with the first electricity being generated in 2016. Now the third reactor is set to begin operation in March 2023, and the fourth reactor in December 2023.

Efforts spotlight slave who inspired beach name, local tale
The curious history of a Massachusetts beach named after an enslaved African American is the focus of new efforts to recognize the role of slavery along the state’s picturesque North Shore

EXPLAINER: How did Russia-Ukraine war trigger a food crisis?
Russian hostilities in Ukraine are preventing grain from leaving the “breadbasket of the world.”

Braves' 14-game win streak, Cubs' 10-game skid both end
The Chicago Cubs became the first team in 23 years to stop a losing streak of 10 or more game while ending an opponent’s winning streak of at least 10 games, beating the Braves 1-0 to end the Braves’ 14-game run

Braves' 14-game win streak, Cubs' 10-game skid, both end
The Chicago Cubs became the first team in 23 years to stop a losing streak of 10 or more game while ending an opponent’s winning streak of at least 10 games, beating the Braves 1-0 to end the Braves’ 14-game run

Stocks eke out a gain but still mark worst week since 2020
Stocks ended another bumpy day mostly higher on Wall Street but still wound up with their biggest weekly losses since March 2020, when markets went into freefall at the onset of coronavirus lockdowns
AP Business - Industries

Takeaways from AP interview: Biden on inflation, US psyche
President Joe Biden sat down with The Associated Press to discuss the state of the economy, his concerns about the national mood and his commitment to standing up to Russia’s aggression in Ukraine

AP Interview: Biden says a recession is 'not inevitable'
President Joe Biden says the American people are “really, really down” after a tumultuous two years with the coronavirus pandemic, volatility in the economy and now surging gasoline prices that are hitting family budgets
AP Business - Utilities

Efforts spotlight slave who inspired beach name, local tale
The curious history of a Massachusetts beach named after an enslaved African American is the focus of new efforts to recognize the role of slavery along the state’s picturesque North Shore
By The Associated Press

Biden, mulling tariff decision, will talk soon to China's Xi
President Joe Biden says he plans to talk to Chinese leader Xi Jinping soon as he considers whether to lift some Trump-era tariffs on Chinese goods
By The Associated Press

Hot weekend for Europe, officials warn of extreme fire risk
People are flocking to parks and pools across Western Europe for a bit of respite from an early heat wave that saw the mercury rise above 40 degrees Celsius (104 Fahrenheit) in France and Spain
By The Associated Press
Privacy | User Agreement | Contact | Advertise With Us
2022 © Jacobs Media Corporation. All rights reserved. EEO Report. Website by Full Media
Login / My Access
close
Search