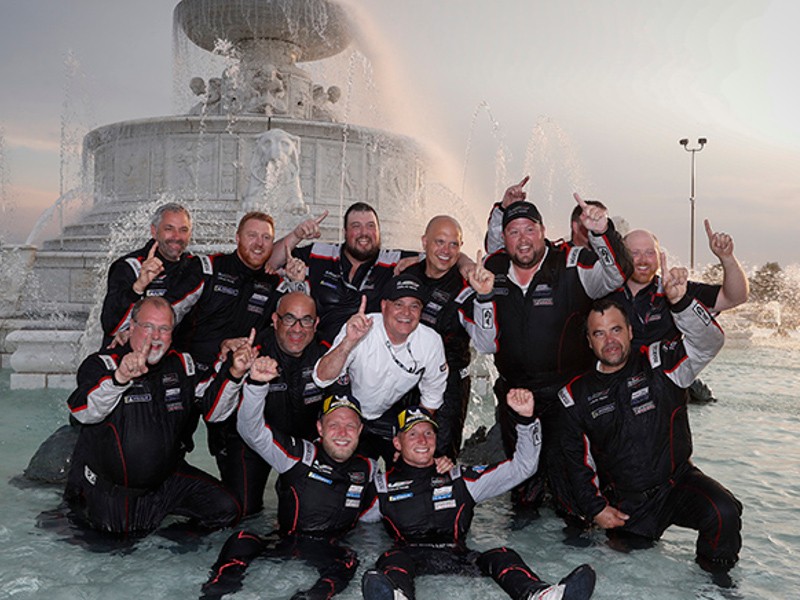 Ganassi’s teams completed a daily sweep when Renger van der Zande held on to the lead given to him by Kevin Magnussen to win the Chevrolet Sports Car Classic in the No. 01 Chip Ganassi Racing Cadillac DPi-V.R.

The victory was the second of the day at Belle Isle Park for Ganassi, who won the IndyCar Series race earlier in the day with Marcus Ericsson. The victories were the first since 2013 for both Magnussen and Ericsson, former Formula One drivers.

“I don’t think it’s any secret that this (IMSA) team was put together at the last minute in the fall of last year,” Ganassi said. “After what we’d all been through in 2020, we really didn’t know where we were at going forward. It’s really special to have an availability of talent … that want to come drive for you.”

Van der Zande was leading a fierce duel with Felipe Nasr as the yellow flag waved when the No. 96 Turner Motorsport BMW stopped on track. When the 100-minute race resumed with 2 minutes 50 seconds left, van der Zande accelerated away from Nasr, getting enough of a gap to win the race by 0.573 seconds.

“It was good for us,” van der Zande said. “The track got really slippery in those last two, three laps. I had some really big moments, and I think the guy behind me, Nasr, also had some big moments.

“I could pull a bit of a gap. Every time you hit traffic, it’s a risk. I knew that those last two, three laps, I wouldn’t have any traffic. That’s why I think it was better for us to have that last restart.”

The victory was the first in the IMSA WeatherTech SportsCar Championship for Magnussen, who joined the series in the offseason after seven seasons in F1. It also let Magnussen join his dad, veteran racer Jan Magnussen, as an IMSA race winner.

“It feels great,” said Magnussen, who also won his first Motul Pole Award on Friday. “This weekend has been extremely good on the team side. We’ve just been fast. I’d say the whole season we’ve been fast. We just haven’t been able to get to the end in the lead. We’ve led a lot of laps this year. Finally, we led the right lap.”

Ganassi, whose operation has won more than 230 races over 31 years in NASCAR, IndyCar and sports car racing – with Saturday’s victory becoming the team’s 60th in IMSA competition – has a knack for finding talent both in and out of the car.

“I think we bring a little to the party as a team, and they bring some things as a driver,” Ganassi said. “I think it’s that combination. There are a lot of guys who are fast, and they don’t get opportunities sometimes. You’ve got to find guys at the right time in their career that need an opportunity to excel and bloom, if you will, and to expose their talents.”

It was the first win of 2021 for Ganassi’s No. 01 car, which led the late laps of the season-opening Rolex 24 At Daytona before a punctured tire sent van der Zande to the pits.

This time, though, the No. 01 and its two pilots were nearly flawless from start to finish.

“We got it together,” van der Zande said. “I’m just super proud of the whole team, how they managed it. I think we can only get better from here. We’ve been a little bit unlucky and made some small mistakes as well, but here we are. This is our first win, and we can build from here.”

Magnussen kept the car in the lead from the start ahead of Nasr’s teammate, Pipo Derani, and handed the lead to van der Zande with 47 minutes remaining. For Magnussen, whose last win came eight years ago in the Formula Renault 3.5 Series, the celebration was magical.

“It’s really a dream,” he said. “I feel very fortunate and privileged and blessed to be able to do that. To come out of a weekend like this with a big trophy, it’s pretty special. I’m very thankful to Chip for making this possible and giving me this opportunity.”

Following the No. 31 Action Express Racing Cadillac DPi-V.R co-driven by Nasr and Derani to the finish was the No. 10 Wayne Taylor Racing Acura ARX-05 shared by Ricky Taylor and Filipe Albuquerque.

The WeatherTech Championship resumes June 24-27 with the Sahlen’s Six Hours of The Glen at Watkins Glen International.

No. 23 Heart of Racing Elevated To GTD Win At Detroit

The first IMSA WeatherTech SportsCar Championship win for any driver is memorable. It will be more so for Ross Gunn and Roman De Angelis.

The drivers of the No. 23 Heart of Racing Team Aston Martin Vantage GT3 crossed the finish line second in GT Daytona (GTD) at the Chevrolet Sports Car Classic. But the No. 39 CarBahn with Peregrine Racing Audi R8 LMS GT3 that had finished first was moved to the rear of the field when a post-race audit showed that the team’s refueling time was faster than the minimum time listed on IMSA’s Balance of Performance (BoP) table for the GTD class.

The change elevated Gunn, De Angelis and the No. 23 to the top step of the podium and gave Aston Martin its first win in WeatherTech Championship competition. It also moved the No. 19 GRT Grasser Racing Team Lamborghini Huracán GT3 up to second place and the No. 66 Gradient Racing Acura NSX GT3 to third.

“A win’s a win,” said De Angelis, the 20-year-old who grew up just across the Canadian border from Detroit in Belle River, Ontario and was racing on his home track for the first time. “Whether you take it after the race or during the race, it’s always going to say that we won the Detroit Grand Prix in 2021. I’ve always dreamt about winning an IMSA race, let alone competing in one.

“To say that we won the Detroit Grand Prix and that the Heart of Racing finally won their first race with the Aston Martin is just unbelievable,” added De Angelis, competing in his 13th series race. “I can’t be more proud and happy of the whole team. It’s so amazing to do it in front of pretty much my home crowd.”

De Angelis started second in class and held strong until pitting and turning the car over to Gunn with just over an hour remaining in the 100-minute event. A third-place finish appeared in the cards for the No. 23 Aston Martin until Bill Auberlen, running second in the No. 96 Turner Motorsport BMW M6 GT3, stopped on track with 10 minutes left. Gunn wasn’t able to close on Jeff Westphal in the No. 39 Audi on the restart but was rewarded with the victory after the race.

“We’ve had a really strong weekend,” Gunn said after getting his first WeatherTech Championship win in just his fifth race. “We didn’t expect it to be our best circuit but we hit the ground running and the team did an awesome job setting up the car.

“Of course, it’s not the circumstances that you want to get your first IMSA win, but a win is a win. We’re very happy and we want to take this momentum forward to Watkins Glen.”

Saturday’s race counts toward the IMSA WeatherTech Sprint Cup and not the season-long championship. Gunn and De Angelis head the Sprint Cup standings after two races, holding a 45-point advantage on Frankie Montecalvo in the No. 12 Vasser Sullivan Lexus RC F GT3.

“The Sprint Cup championship holds just as much importance as all the championships,” Gunn said. “Every points-gaining position we can get, the better. So far, we’ve executed a good season, we haven’t made many mistakes. Very, very proud of this team. I came here with really high expectations from what I saw last year, and they’ve exceeded it in many ways.”

It didn’t pay WeatherTech Championship points, but the two Corvettes racing in the Chevrolet Sports Car Classic earned their due in goodwill and some friendly competition.

The Nos. 3 and 4 Corvette Racing C8.Rs made a special appearance in the race at Belle Isle Park, competing as the lone GT Le Mans (GTLM) entries when the opportunity came available with the date of the 24 Hours of Le Mans shifted to August.

Nick Tandy and Tommy Milner took the No. 4 Corvette across the finish line 0.226 seconds ahead of Jordan Taylor and Antonio Garcia in the No. 3 after a spirited intra-team competition. More than the win, Milner said, was the chance for the team to thank the Detroit fans and everyone involved with the program by racing on Belle Isle for the first time in 13 years.

“The whole point of coming here was to showcase these Corvettes,” Milner said. “This team hasn’t been here since 2008, so it was a great opportunity to showcase Corvette Racing to all the engineers and to a lot of the people who work for Corvette Racing. Their families were able to be here to see these cars, so it wasn’t just about us driving on the racetrack. It was also about giving back to the people who make this program what it is and what they’re working toward.”

Best of all, Milner added, was the valuable information the team gathered running the mid-engine C8.R that debuted last year on a street circuit for the first time.

“For us, it was learning about the car and the tires in those situations and getting us back in the groove because we’ve been off so many months and we have a long run ahead with many races,” he said. “It was good for us to get the rust kind of shaken off and our minds back in the racing mode again.”

All five WeatherTech Championship classes – GTLM, GTD, Daytona Prototype international, Le Mans Prototype 2 and Le Mans Prototype 3 – will be in action June 24-27 at the Sahlen’s Six Hours of The Glen at historic Watkins Glen International. It is the third of four races counting toward the IMSA Michelin Endurance Cup as well as the season-long titles.