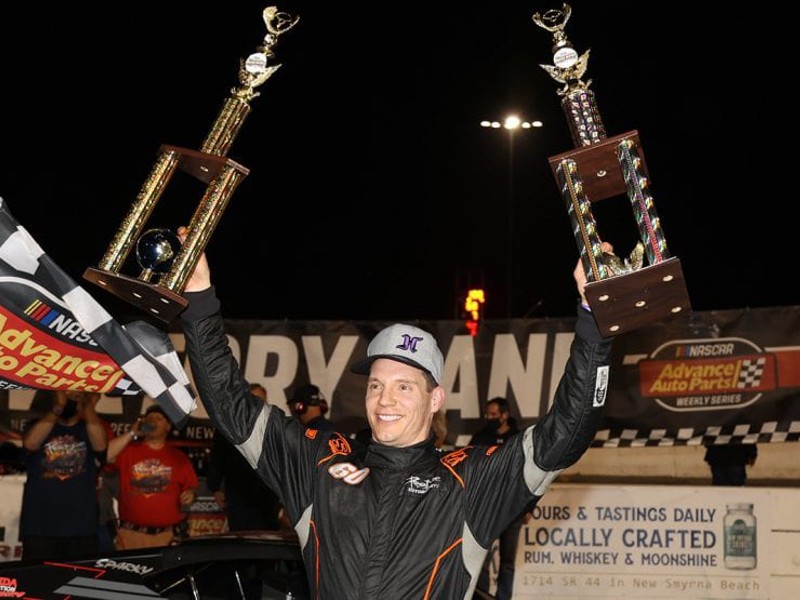 Matt Hirschman won both the Richie Evans Memorial 100 and the week-long Tour-Type Modified title for the second year in a row on Friday night at New Smyrna Speedway. Photo: Jim Dupont/NASCAR
Contact Editor

Hirschman closed out the Tour-Type Modified portion of the 55th World Series of Asphalt Stock Car Racing at Florida’s New Smyrna Speedway on Friday night with his fifth victory — and third straight — in the annual 100-lap event that honors the NASCAR Hall of Famer and Modified legend.

“I started my career over 20 years ago at Evergreen Speedway in Pennsylvania. I never knew if I’d win one race,” said Hirschman, who also claimed his third World Series Tour-Type Modified championship with the victory. “To come down here to Florida and win the biggest race here, named after Richie Evans, is just quite a career. I’m thankful for everyone who has helped get me here.”

The victory also gave Hirschman the week-long Tour-Type Modified Division title for the second straight year and third in the last four.

Most of the race was dominated by pole sitter Craig Lutz. But when Lutz retired from the race with 24 laps left with a mechanical problem, that handed the lead to Hirschman. However, it wasn’t a cruise to the checkered flag for the Pennsylvania driver as he had Wednesday’s John Blewett III Memorial 76 winner Ryan Preece hot on his heels.

Preece, who has won the Richie Evans Memorial three times (2015-16 and 2018) trailed Hirschman over the final laps. However, a caution flag with two laps left gave Preece another shot at Hirschman.

During the ensuing restart Preece got the jump on Hirschman and pulled his No. 6 into the lead. With the white flag in sight for Preece, the caution would wave yet again as a crash in Turn 2 slowed the action before a lap could be completed.

On the ensuing restart, Hirschman wouldn’t let Preece get the jump on him a second time as he launched into the lead and was uncontested during the final two laps.

His fifth victory in the Richie Evans Memorial 100 ties the late Ted Christopher for the most victories in the annual event.

“We’ve had a lot of success here over the last few years. They’re all memorable, these Evans 100 wins,” said Hirschman, who won the race in 2010 and 2017 before taking it the last three years. “Last night, it’s nice to win, but it’s hard for me to celebrate it because to me there is a bigger prize ahead. Tonight we got it.”

Jon McKennedy was able to work his way up to second during the two-lap dash to the checkers, followed by Anthony Nocella, Preece and Eric Goodale.

Nasse Is Classy & Swanson Is A Champion

Stephen Nasse got a late start this year at New Smyrna, but he appear to be peaking at just the right time.

Nasse drove his No. 51 Jett Motorsports entry to victory in Friday’s 100-lap Pro Late Model finale after overtaking Jett Noland in the final 10 laps. It was the culmination of a race-long battle between the duo that saw both men take turns at the front of the field.

“I knew he was going to make it tough on me,” Nasse said of Noland. “He knew he had one coming from me too, running me up the track like that. I know Jett real well. Thankfully we came out of there with no wrecked race cars and that’s what’s most important.”

While Nasse celebrated the victory, USAC star Kody Swanson got to celebrate his first championship in a stock car after claiming the World Series Pro Late Model championship following an eighth-place finish.

Swanson entered the race needing to finish ninth or better to claim the championship no matter what his closest challenger, Connor Jones, did. However, Jones was eliminated from the race in a late incident, all but clinching the title for Swanson despite a spin by Swanson a few laps later.

“It sure means a lot,” Swanson said of the championship. “God has blessed me with so many wonderful people in my life from my family from the very beginning to my wife and kids and this team. For them to take a chance on me, bringing me down here to one of the toughest places and toughest weeks to run late models and to come down here to try and learn.

“So to come away with the success we did and the championship is wonderful.”