Falcons open camp with questions about hiring of Durkin

In this Oct. 14, 2017, file photo, Maryland head coach DJ Durkin, center, stands on the sideline in the first half of an NCAA college football game against Northwestern in College Park, Md. The Atlanta Falcons have brought in former Maryland coach DJ Durkin to serve as a guest coach during training camp, drawing immediate scrutiny over the wisdom of taking on someone who was fired from his previous job after a player's death. This is the first coaching stint for Durkin since he was dismissed by the Terrapins last October. (AP Photo/Patrick Semansky, File)

FLOWERY BRANCH, Ga. (AP) — Looking for a positive vibe after a disappointing season, the Atlanta Falcons instead faced scrutiny Monday over a coaching decision that would normally attract scant attention.

Shortly after taking the field for their first practice, the Falcons announced former Maryland coach DJ Durkin will serve as a guest coach during training camp.

This is first official coaching job for Durkin since he was fired by the Terrapins last season amid allegations that a toxic culture within his program led to the death of 19-year-old offensive lineman Jordan McNair.

Durkin will only be with the Falcons for about 10 days, but head coach Dan Quinn faced immediate questions about his decision. He defended the hiring and said he expects Durkin to provide valuable insight into a defense that endured a rash of injuries in 2018, contributing greatly to the first losing record (7-9) in Quinn's first four seasons in Atlanta.

"I would hope people would understand and know me well enough that nothing's more important than team," Quinn said. "The fact that I know this coach firsthand, and I know what his character is, and then the due diligence that goes with that, I would certainly hope that anybody covering the team or the fan base would know that I always have the team's best interests in mind and would never put anybody into a space that would be otherwise."

On a sweltering summer day, the Falcons began an abbreviated training camp schedule ahead of their appearance in the Aug. 1 Hall of Fame game against the Denver Broncos. Durkin's stint will end when the team departs for Canton.

The hiring of Durkin was buried in an announcement that began with three other coaches who will join the team during training camp as part of the Bill Walsh fellowship program.

There was no mention of the tumultuous ending to Durkin's head coaching stint at Maryland, which began to unravel after McNair's heat-related death during a team workout. After being placed on leave for the first eight games of the 2018 season, Durkin was reinstated by the Terrapins on Oct. 30 — only to be fired the very next day when the school faced withering criticism.

A university investigation found that Durkin and his staff created a culture in which players were afraid to speak out. McNair died two weeks after collapsing during a team conditioning drill, leading to revelations that trainers failed to recognize the signs of heat distress or take steps to cool the player.

"I know DJ firsthand," Quinn said. "I coached with him. I know what his character is. We did all of our due diligence of calling everybody at Maryland and had our own follow-up to there."

Hassan Murphy, an attorney representing McNair's parents, said the family had no comment on Durkin's assignment with the Falcons.

Durkin also spent some time with Nick Saban's Alabama coaching staff ahead of the College Football Playoff last season. But Saban called it a "professional development" assignment and stressed that Durkin was not been hired in any capacity by the Crimson Tide.

"He is simply observing our operation as many other coaches have done through the years," Saban said at the time.

Quinn, who is adding the role of defensive coordinator to his head coaching duties this season, said he believes Durkin can provide some helpful insight to a unit that is looking to bounce back from an injury-plagued year, which was especially disappointing for a team just two seasons removed from a Super Bowl appearance.

"I think it's a huge advantage to have someone you respect who can look at certain things to help your team in the evaluation," Quinn said, adding that he had no reservations about hiring a coach who was sure to bring plenty of criticism given the way he ran things at Maryland.

"Unfortunate situation? Of course," Quinn said. "But as far as eyes to look at the defense, the special teams, to help us, I definitely knew the advantage of that."

NOTES: WR Julio Jones did not participate in practice, but Quinn said it had nothing to do with the star receiver's ongoing negotiations for a new contract. Jones is coming off a foot injury, and the team plans to ease him back into full-speed workouts. ... S J.J. Wilcox, who was signed in free agency to add depth in the secondary, left the first practice with what appeared to be a right knee injury. Quinn said he would not have an update on Wilcox's condition until Tuesday.

Falcons open camp with questions about hiring of Durkin
The Atlanta Falcons have brought in former Maryland coach DJ Durkin to serve as a guest coach during training camp, drawing immediate scrutiny over the wisdom of taking on someone who was fired from his previous job after the death of a player
Associated Press (AP)

Horton applauded by fellow swimmers for stand against Sun
Mack Horton walked into the dining room at the athletes' village and the applause began for the Australian swimmer following his personal protest against China's Sun Yang at the world championships.
AP Sports

Ohio State, other Big Ten East powers facing uncertainty
The two most important spots on a football team are the coach and the quarterback
AP Online Football 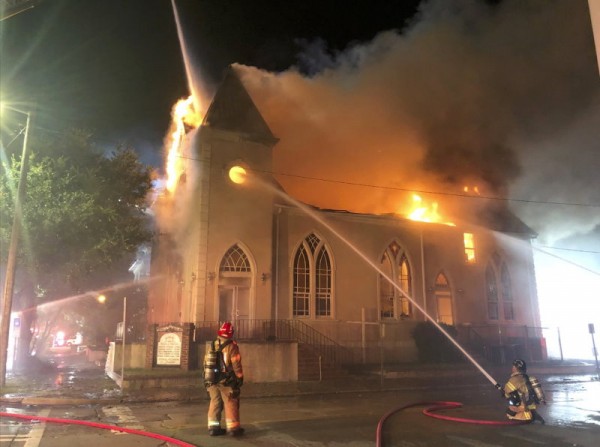 Firefighters battle wildfire in Portugal, 32 people hurt
More than 1,000 firefighters are battling a major wildfire amid scorching temperatures in Portugal, where forest blazes wreak destruction every summer
By The Associated Press

The Latest: UK says it will bolster security for shipping
Britain says it is joining with European allies to form a 'maritime protection mission' in the Strait of Hormuz following Iran's seizure of a U.K.-flagged oil tanker in the busy waterway
By The Associated Press