The winning ticket was sold at Marietta Liquor & Deli, the California Lottery said in a statement. Lottery officials said the earliest the ticket could be redeemed is 8 a.m. Monday. The winner has one year to claim the prize.

The store just off a highway caters to retirees who live in Sun City — part of the small city of Menifee — that was originally developed as a retirement community and to motorists passing through the area about 80 miles (130 kilometers) from Los Angeles.

Liquor store owner Matthew Alberre said he does not know which of his customers won the jackpot or what his family will do with the $1 million "retailer bonus" that lottery officials said is set aside for the retailer selling the winning ticket.

"We're so blessed for this to happen," said Alberre, who owns the store with his father.

The year began terribly for the family because Alberre's father was diagnosed with pulmonary fibrosis.

"Starting out the year it seemed like it was going to be the worst year in the world and six months later our store hit the Powerball. We're very, very grateful for this to happen to our store," Alberre said.

Sun City residents were wondering if they might know the winner. At a breakfast at the local Knights of Columbus organization, Armand Blais said people there hoped the ticketholder lived in their community and would assist their efforts to build a new church.

"We're hoping they're a parishioner and they'll bring us a check tomorrow," said Blais, the president of the Sun City Civic Association's board.

Sun City has about 4,700 homes developed in the 1960s for residents age 55 and older. The homes today are part of Menifee, population 89,000, but those living in Sun City still proudly call the community by its original name, Blais said.

The homes are clustered around a golf course and residents join in activities ranging from tai chi and swimming to woodworking and shuffleboard, according to the association's website.

Menifee Mayor Neil Winter said he hoped a local resident bought the winning ticket at the store in a heavily visited intersection that has sold winners before but never for so much.

"There's a lot of good folks over there, so hopefully one of our Menifee folks won," he said.

Powerball spokesman Randy Miller said the estimated jackpot prize is based on a winner choosing an annuity, which pays off over 29 years. The cash prize would be $279.1 million. Both prize amounts would be before taxes are deducted.

Before the drawing Saturday night the jackpot was estimated at $435 million. The jackpot had grown because no one had matched all the numbers since April 1.

The odds of winning Saturday's drawing were only one in 292.2 million.

AP Exclusive: Judy Garland enshrined in Hollywood mausoleum
Judy Garland has been laid to rest in a mausoleum named for her at Hollywood Forever Cemetery 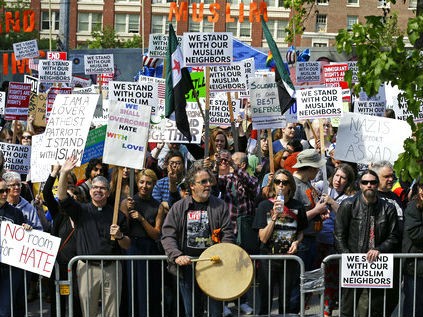 APNewsBreak: Family: Man killed by cops was off medication
Family members of a black man who was fatally shot by three Oklahoma law enforcement officers say he had stopped taking medication to treat a bipolar disorder and was in declining mental health since the recent death of his father
U.S. News

Trump wages battle against regulations, not climate change
What President Donald Trump really believes about global warming is something of a mystery, but his actions make clear he doesn't consider it a problem for the federal government to solve.

Tapwrit wins Belmont Stakes by 2 lengths for Pletcher
Tapwrit overtook favored Irish War Cry in the stretch to win the Belmont Stakes by two lengths, giving trainer Todd Pletcher his third victory in the final leg of the Triple Crown

UK leader May strikes tentative deal with N Ireland party
British Prime Minister Theresa May has struck a deal in principle with Northern Ireland's Democratic Unionist Party to prop up the Conservative government, stripped of its majority in a disastrous election

UK premier strikes tentative deal with N Ireland party
British Prime Minister Theresa May has struck a deal in principle with Northern Ireland's Democratic Unionist Party to prop up the Conservative government, stripped of its majority in a disastrous election

Tony Awards on Sunday take place under 'Hamilton' shadow
At Sunday's Tony Award telecast, the leading nominees are 'Natasha, Pierre & The Great Comet of 1812' with 12 nominations, 'Dear Evan Hansen' with nine and 'Hello, Dolly!' with 10
By The Associated Press