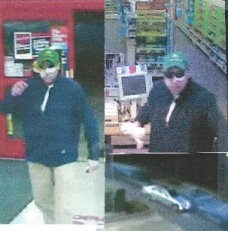 Investigators with Oakwood went public with their case after the Hall County crime unfolded.

"It turned out to be the same suspect, that's why we had to release our photograph out today," Sridej said.

He'd said police have been working their case, sending evidence and prints to the Georgia Bureau of Investigation.

The Oakwood case happened at closing time, according to Sridej. He said the suspect entered the pharmacy and asked the pharmacist for Lortab and Percocet. Sridej said he then walked behind the counter and grabbed drug bottles and filled prescription bags before leaving.

"No one was hurt. They pretty much let him take what he wanted and take off with it," Sridej said.

The CVS suspect is described as a white man in his late 30's. Police believe he's 6'03" to 6'04". Sridej said the man was wearing glasses and a green John Deere baseball cap.

Similar to the Hall County suspect, the CVS robber wore white gauze on his left eye and on his right cheek. The getaway vehicles are also similar.

Oakwood Police asked anyone with information in the CVS case can call the police department at (770) 534-2364.
© Copyright 2021 AccessWDUN.com
All rights reserved. This material may not be published, broadcast, rewritten, or redistributed without permission.