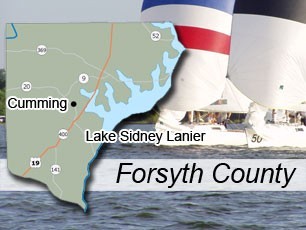 Forsyth County Fire Division Chief Jason Shivers said the apartment was above a barn on Ascot Drive in the northwest part of the county. He said the woman was trapped.

"The firefighters did make a very rapid recovery of her, got her outside to safety as quickly as possible, and the fire was brought under control within a matter of minutes after arrival," Shivers said.

The woman was flown to Grady Memorial Hospital in Atlanta for treatment of burns and smoke inhalation.

Shivers said the woman's small dog was also rescued and given oxygen at the scene. He said the dog is recovering at veterinarian hospital.

Fire investigators are looking for the cause of the blaze.

"Something we always stress, that working smoke detectors on every level of a home is of a critical importance to getting you out early in the event of fire. Unfortunately in this case there was a smoke detector present , but it did not have a battery in it," Shivers said.
© Copyright 2021 AccessWDUN.com
All rights reserved. This material may not be published, broadcast, rewritten, or redistributed without permission.