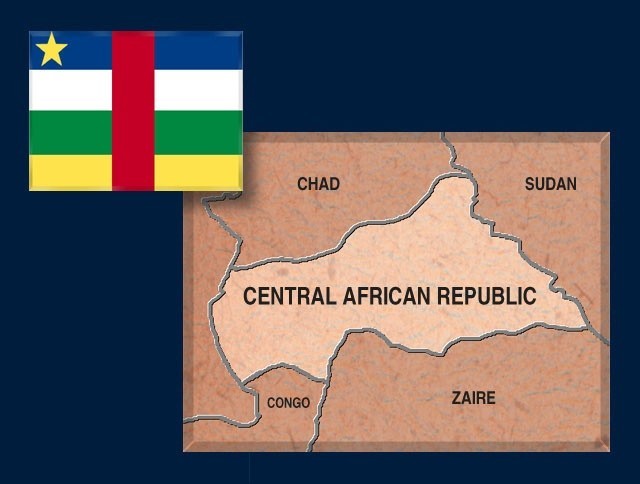 Government soldiers appeared to be in control of Bambari following the clashes, according to military officials. The town is located about 385 kilometers (240 miles) from the capital and had been under rebel control for five days.

The United States evacuated about 40 people, including the U.S. ambassador, on an U.S. Air Force plane bound for Kenya, said U.S. officials who insisted on anonymity because they weren't authorized to discuss the operation. The United States has special forces troops in the country who are assisting in the hunt for Joseph Kony, the fugitive rebel leader of another rebel group known as the Lord's Resistance Army. The U.S. special forces remain in the country, the U.S. military's Africa Command said from its headquarters in Stuttgart, Germany.

The evacuation of the U.S. diplomats came in the wake of criticism of how the U.S. handled diplomatic security before and during the attack on its consulate in Benghazi, Libya, on Sept. 11. The ambassador and three other Americans were killed in that attack.

French diplomats are staying despite a violent demonstration outside its embassy earlier this week. Dozens of protesters, angry about a lack of help against rebel forces, threw rocks at the French Embassy in Bangui and stole a French flag. French Foreign Minister Laurent Fabius spoke via phone with President Francois Bozize, asking him to take responsibility for the safety of French nationals and diplomatic missions in Central African Republic.

Bozize on Thursday urgently called on former colonial ruler France and other foreign powers to help his government fend off rebels who are quickly seizing territory and approaching the capital. But French President Francois Hollande said France wants to protect its interests in Central African Republic and not Bozize's government.

This landlocked nation of some 4.4 million people has suffered decades of army revolts, coups and rebellions since gaining independence in 1960 and remains one of the poorest countries in the world. The current president himself came to power nearly a decade ago in the wake of a rebellion in this resource-rich yet deeply poor country.

Speaking to crowds in Bangui, a city of some 600,000, Bozize pleaded with foreign powers to do what they could. He pointed in particular to France. About 200 French soldiers are already in the country, providing technical support and helping to train the local army, according to the French defense ministry.

"France has the means to stop (the rebels) but unfortunately they have done nothing for us until now," Bozize said.

The rebels behind the most recent instability signed a 2007 peace accord allowing them to join the regular army, but insurgent leaders say the deal wasn't fully implemented. The rebel forces have seized at least 10 towns across the sparsely populated north of the country, and residents in the capital now fear the insurgents could attack at any time, despite assurances by rebel leaders that they are willing to engage in dialogue instead of attacking Bangui.

The rebels have claimed that their actions are justified in light of the "thirst for justice, for peace, for security and for economic development of the people of Central African Republic."

The rebels also are demanding that the government make payments to ex-combatants, suggesting that their motives may also be for personal financial gain.

Paris is encouraging peace talks between the government and the rebels, with the French Foreign Ministry noting in a statement that negotiations are due to "begin shortly in Libreville (Gabon)." But it was not immediately clear if any dates have been set for those talks.

The U.N.'s most powerful body condemned the recent violence and expressed concern about the developments.

"The members of the Security Council reiterate their demand that the armed groups immediately cease hostilities, withdraw from captured cities and cease any further advance towards the city of Bangui," the statement said.
© Copyright 2022 AccessWDUN.com
All rights reserved. This material may not be published, broadcast, rewritten, or redistributed without permission.