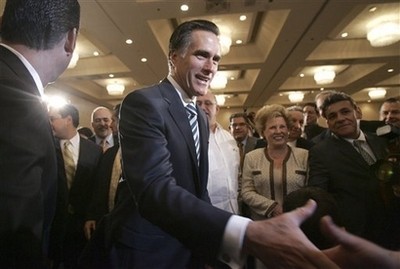 The newspaper said in an editorial published in its Sunday newspaper that it believes Romney best exemplifies the qualities needed in a president, including business knowledge and experience and the ability to perform under pressure.

The newspaper said that Arizona Senator John McCain, who is also seeking the G.O.P. nomination, lacks the management experience and business and economic expertise to be the nominee.

Crist praised McCain as a ``true American hero.'' At a campaign appearance in St. Petersburg, he added, ``After thinking about it as much as I have, I don't think anybody would do better than the man who stands next to me, Sen. John McCain.''

It was the second high-profile endorsement in as many days for McCain, who is locked in a tight primary race with former Massachusetts Gov. Mitt Romney. Crist stepped to the podium a little more than 24 hours after Sen. Mel Martinez announced he was backing his colleague in the Senate. Officials said Martinez had prodded the governor to follow his lead.

The winner of next week's primary will capture all 57 delegates at stake, a large prize that will set the stage for a virtual nationwide primary on Feb. 5.

It's unclear what effect the two endorsements will have on McCain's candidacy.

At the very least, the nods of Florida's two top Republican elected officials could serve to validate McCain's candidacy with the GOP establishment and counteract the fears among some that he would not be a loyal Republican while in the Oval Office.

Crist, a popular first-term governor, had suggested he would stay out of the multi-candidate GOP primary, and played coy about his preferences for a year. He met with all the serious contenders, and appeared with some at events.

McCain campaigned for Crist during his 2006 campaign for governor, endorsing him before the primary and appearing with him the day before the election, when Crist opted not to appear with President Bush at a Pensacola rally.

Giuliani also campaigned with Crist, and Romney delivered a $1 million check as chairman of the Republican Governors Association.

While Crist has met with other Republican candidates in his office, he took an extra step last spring by introducing McCain at a fundraiser held a few blocks from the Capitol. During a debate last fall, when Crist introduced the Republican candidates, he warmly embraced McCain while shaking the hands of his rivals.

Crist has been seen as a moderate Republican. He has championed efforts to curb climate change, and was praised by former President Clinton for his efforts to restore voting rights of felons who have completed their sentences.

He also pushed for a law that requires a paper trail in state elections, a measure that bans the electronic voting machines his predecessor, Gov. Jeb Bush, sought after the 2000 presidential election. That election ended in a hotly contested recount, which President Bush won by 527 votes.
© Copyright 2021 AccessWDUN.com
All rights reserved. This material may not be published, broadcast, rewritten, or redistributed without permission.